Why news should have never been free

People turned to traditional media as they needed news which was reliable and accurate during a time when their lives were at stake. 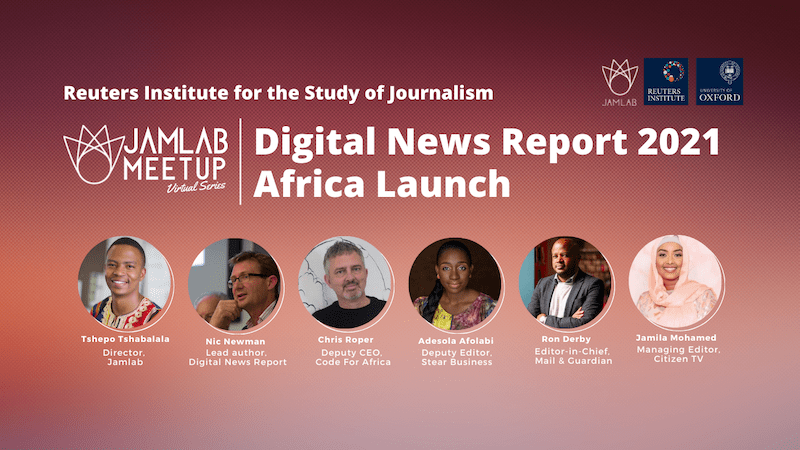 Due to the pandemic, trust in the media has significantly increased but can the media maintain this trust? That was the burning question at the Africa launch of the Digital News Report 2021. The discussion was hosted by Jamlab in partnership with the Reuters Institute where journalists from notable media houses in Nigeria, South Africa and Kenya delved deeper into the findings of the report and what this report means for the news market on the continent.

“A large number of the population was in lockdown due to the pandemic, so a lot more people were at home watching television and there is this novel virus that no one knows much about that has literally brought the whole world to a standstill,” said Jamila Mohamed, managing editor at the Citizen. Adding that: “people have gone back to trusted news to get information about this pandemic, and this is what happened in Kenya”

Mohamed explained that a survey by the Kenyan Media Council conducted between April 2020 and July 2021, showed that there were over 400,000 more TV viewers compared to the previous year. However, Mohamed said that the increased viewership did not bring in more revenue for media houses. She explained that advertisers were reluctant to advertise during this period as people were losing jobs and they felt it would be insensitive to encourage people to buy products.

The Digital News Report stated that local media houses were highly rated compared to international media houses such as the BBC. Mohamed said the reason for this is because “Kenyan journalists are going out of the way to tell you more by the time you switch on the news at seven o’clock and they have been able to capture the audience”. However, Mohamed said: “trust has gone up and that is good news, but how do we keep all these people on with all these challenges of streaming services we need to keep these people on and what do we do to keep them watching”.

In Nigeria, “the traditional media were on top of reporting on issues such as the EndSars Protest and the pandemic,” said Adesola Afolabi, deputy editor at Stears Business. Afolabi said that during the lockdown they moved their operations remotely which allowed them to cover events from their remote locations and helped them maintain their news cycle. She noted that the publication was very proactive during the EndSars protest and was able to work with people who were on the ground despite the lockdown. The publication removed its paywalls for articles about the protest, which detailed the abuse that the protesters experienced, and which Afolabi said, created more trust between the readers and the publication.

“If it was not for the pandemic, the trust levels would have decreased quite significantly,” said Ron Derby, editor-in-chief at the Mail and Guardian. “The pandemic has brought everyone to find some sense of established truth and it has helped quite significantly with where we were heading”. Adding that: “the pandemic for me is a helpful blip”. However, he cautions that there are still fundamental problems within the media industry that need to be addressed. “I am very interested to see post-pandemic, whether we are able to maintain this given the political dimensions of South Africa,” he said.

Can media houses encourage people to pay for news?

Mohamed said in Kenya, some media houses have introduced paywalls, however, this has affected their readership as people are not willing to pay for news. “I think people need to understand that they are paying for credibility and reliability, we are selling the certainty of facts,” she said. Mohamed explained that the surge of fake news and propaganda is a reason why people should pay for news and content. She added that media houses and journalists use a lot of time and effort to verify information, “as journalists we are supposed to tell the truth and clear misconceptions and I think that this role of the media cannot be more important now than ever before”.

“We are really aware of the economic conditions in Nigeria and getting people to prioritise news as a product that they should pay for is a very important decision to make,” said Afolabi. She said to get people to pay for news they have to manage expectations, so people know what they are paying for. Stears Business also provides content that helps people make financial decisions which encourage people to pay as people see the value of their subscription. Afolabi said that the publication engages in topical discussions, for example, they have Twitter treads that break down topics such as the ban of youth trading cryptocurrencies. Afolabi said that the free articles about the EndSars protests and the pandemic were highly detailed. “Being at the centre of that discussion and being a provider of information endears people to us as a value-added service,” she explained.

Derby said that there is an appetite for people to pay for news but it depends on what a publication has to offer. Due to the lockdown, media houses lost revenue from a decline in print sales which resulted in organisations looking for revenue from readers. Derby said that charging readers is overdue and should’ve been done years ago. “We are late to the game and we should’ve convinced readers to pay for news,” said Derby. He said that media companies that relied on print revenue, want to immediately replace the revenue lost from advertising but it will take time, it’s a 10-year outlook. “News should’ve never been free because there are salaries being paid for,” noted Derby.

Chris Roper, deputy chief executive at Code For Africa, who authored the South Africa and Nigeria sections of the report, said: “I think to make money is not from a paywall but from another relationship with the reader because what made you money before in the media was our relationship with our reader”. Adding that: “we used to sell them toothpaste now we need to sell them the truth and I think that’s going to be the big difference in how we become sustainable going forward”.

Paywalls may work in Africa but slowly, said Nic Newman, lead author of the Digital News Report at the Reuters Institute. “I think it is a long-game and it’s a mixed model. There’s always going to be free news around and the challenge for those from the newspaper background is that they can’t do what they always do which is try and produce a product for everyone or for large groups of people. But they have to really focus on a specific group and serve them added value to what’s available for free”.