The world of financial journalism with Sumitra Nydoo

We spoke to award-winning financial journalist Sumitra Nydoo, who has over 20 years of experience in radio and television, about her journey in the industry 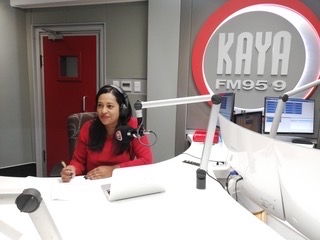 Sumitra Nydoo. Picture: Supplied
Sumitra Nydoo is an award-winning financial journalist with over 20 years of experience in radio, and television. She currently works for CGTN Africa as a business correspondent.
Over the years Nydoo has honed her skills as a financial journalist having worked at Summit TV (now known as BDTV) and for the SABC, where she did daily live market crossings from the Johannesburg Stock Exchange. Sumitra also became a familiar voice on Talk Radio 702 in the mornings as a business news presenter.
She also wrote for Forbes Africa. Her work has won numerous awards including the Telkom Journalist of the Year competition. Sumitra received international recognition when she scooped the USA/SA Excellence in Financial Reporting Award in 2005. In 2014 she won the APO Broadcast Media Award.
She spoke to Jamlab about her journey as a financial journalist.

You have a successful career in business journalism, what made you go into business/financial journalism?

I knew when I was in high school that I wanted to be a journalist. I started as a trainee in radio news in 1998 and covered politics.  I then got a job at Business Day Radio and worked in the same offices as Summit TV now Business Day TV (BDTV).  While working there I was exposed to the stock markets and covered business news. I was hooked, loved it, still do.

Financial/ business journalism is often seen as male-dominated. What have been some of your experiences of being a woman in journalism? How have you navigated this area of journalism?

I never really felt that it was male-dominated because there were quite a few females in the industry at the time.  My very first opportunity in 1998 was given to me by a female editor Benedicta Dube. She also trained me as a reporter in news and current affairs. I worked with other female anchors and reporters at BDTV and then later at SABC. It was my editor at SABC, Stephen Gunnion that gave me an opportunity to learn about the markets and report on them. I then moved on to eNCA where I was hired by a female, Debora Patta.  Later I was hired by another woman, Pheladi Gwanga at Talk Radio 702. So there have been quite a few women that led my path. There are more women than I’ve worked with over the years and I think it’s reflective, at least of my journey. So there are opportunities. What I did find as a challenge, is trying to balance work and being a mother. I’ve been a single mum for most of my life.  Keeping up to date with everything that’s going on around you is part of the territory of being a journalist.  And that’s sometimes really hard when you have to take care of children and be present in their lives.

What other misconceptions do you think exist about financial journalism?

That it’s boring. I find it fascinating and exciting. Learning economics gives you an understanding of how money, business, and the economy works. Over the years I found that not many stayed because it was difficult to understand or not as interesting as politics or sexy as entertainment.  It’s a specialisation, like sport to tech.

Do you think this type of journalism reaches as many people as, say, politics and hard news?

Not really, and that’s because many don’t understand it. So you find that those that are in business or work in the financial space have an interest, but outside of that the audience is limited.  It’s not as popular as in some countries overseas.  For me, it is still a niche market.  We are seeing and hearing a lot more in terms of business news. It’s also a money game, pun intended.  Private broadcasters rely on advertising to make money, you have to have viewers in order to get advertising.

What are some of the challenges you face as a TV journalist?

My biggest challenge is keeping to time.  A news story for television generally varies between a minute and a half to two and half minutes, depending on which station you work for or the type of broadcast you’re feeding.  News requires shorter stories.  I love to really unpack my story and I struggle to stay within the timeframe, I always have so much to say.  This is why I like doing documentaries.

What makes a good TV journalist?

Being well-read and knowledgeable.  Also being able to find the right angle, what is the story?  There’s a story in everything, but deciding which is the most important story for your audience is important.  Writing creatively for me is a priority, especially when you’re covering business and economic news, the content is not always easily understood.  Making sense of it and breaking it down for the man in the street is crucial.

Is there enough training and support for young journalists who want to get into financial TV journalism?

I don’t think so.  I started in politics and current affairs. When I moved to financial journalism I had to study again.  I loved it, but I wasn’t fully prepared.  I applied to study economics to give me a firmer footing. I had also received an opportunity to go to the Sanlam Winter School for Financial Journalists, where I learned to read financial statements.  I’m still learning. I also train young producers, and often they find it very difficult to understand the concepts. And these are students that have completed their media and journalism studies.  I definitely think more education and training is needed.  There are a few media houses that offer internships but proper training is needed.

What have been some of the highlights of your career?

Meeting Nelson Mandela on stories.  I first met him in 1998, he was campaigning in Escort.  It was emotional, I will never forget that day. Every single time thereafter was special.

I managed to get Mandela to come in for an interview at Kaya FM in 2000, It was to talk about AIDS.  My elder son, who was 6 at the time insisted on coming with me to work to see him. He had met him before when I worked in KwaZulu-Natal.  So I took him with and he sat on Mandela’s lap the entire time. Meeting Richard Branson was another highlight, I had read his books, and getting to meet to unique business mind was enlightening.

Being able to travel for stories is still a highlight for me. Singapore was my very first work trip in the early 2000s when SAA was accepted into the Star Alliance.  I’ve been to Seychelles twice for work.  I’ve visited all of South Africa’s neighbours.  It’s not as glamourous, it’s much harder to work on location than at home, but it’s worth it. For me, travel is an education. My last trip before Covid was Rwanda to cover coffee farming, I loved it.

What advice would you give to up-and-coming journalists?

You’ve started two organisations: Inspire Media and JK Learning Foundation, can you tell me more about those organizations and the work that you do?

Inspire Media is a production company.  I started it in 2016 to support all of the different television work I do.  I freelance for a few media houses, the main one being CGTN Africa.  But I also work on producing content for the corporate sector.  I contribute content for programmes and shows.  I consult on media strategy for private companies and do media training for executives.  And I work on documentary research and production.

I started the JK Learning Foundation in 2014 in honour of my parents.  I wanted to give back to my community.  I had just completed a documentary for a client which focussed on early childhood development.  Through my research, I learned how vital ECD is for a child’s foundation and that we (South Africa) are sorely lacking in this area. So I opened the Greymont Reading Centre to help.  My dad was an avid reader and he taught us the power of education. Over the years, the reading centre has evolved into a full learning centre where we assist with reading, writing, homework, projects and assignments.  We currently have 50 students. We are opening a new class next year.