The power of social media in amplifying harmful narratives 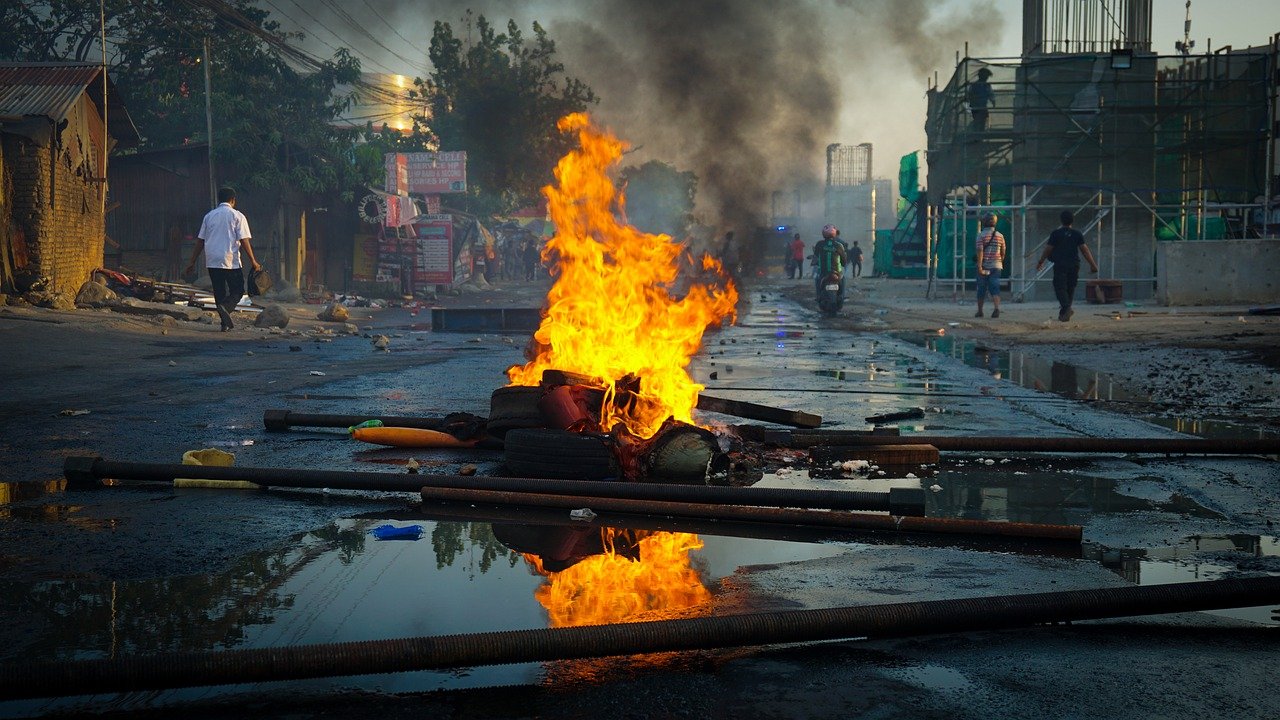 The use of propaganda, which is defined as the deliberate dissemination and manipulation of information to influence public opinion, has been used for centuries by politicians, governments, and religious leaders.

In modern times, the rise of social media has allowed propaganda to be used in more wide-reaching ways. In July, following the imprisonment of former president Jacob Zuma, South Africa witnessed the mobilisation on Twitter of ordinary citizens to commit acts of looting, violence, and criminality which caused the destruction of local businesses, millions of rands worth of infrastructure and setting back an already weakened economy still recovering from the effects of a devastating pandemic.

This was unpacked in a webinar titled Social Media Narratives Behind the Failed Insurrection, which was hosted by the Ahmed Kathrada Foundation in partnership with the Centre for Analytics and Behavioural Change (CABC) and Media Monitoring Africa. 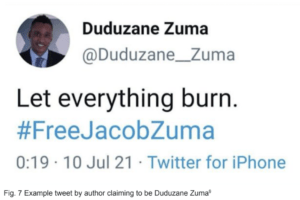 A tweet by an author claiming to be Duduzane Zuma, the son of Jacob Zuma.

According to Camaren Peter of the CABC, social media platforms have created a sort of “smart weaponised propaganda” that is able to target certain groups and manipulate their preferences, fears, and prejudices. “The business models of social media platforms are in part responsible for reproducing and entrenching the kind of sociopolitical divisions that we’re seeing.” He added: “It’s created a room for coordinated narrative manipulation to be conducted by domestic and foreign actors interested in changing the political sphere within a country. Platforms themselves are struggling to handle what they have created.”

In May this year, the CABC released a report where it identified 51 pro-Zuma Radical Economic Transformation Twitter accounts that rallied behind the statesman and his allies while denouncing those individuals who were behind their prosecution. 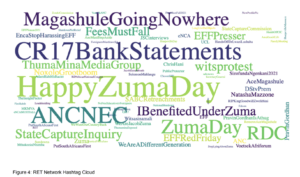 Peter said this RET network exploited the narratives of inequality, poverty, and sociopolitical faultlines to gain support and leveraged legitimate news articles but laced them with conspiracist innuendo. “This goes way back to Bell Pottinger in 2016/2017. It mainstreamed the terms White Monopoly Capital, Radical Economic Transformation, Expropriation Without Compensation so much so that they have become part of our normal discourse today,” he said.

The network behind the July riots did not focus on creating unique posts in the fashion of Bell Pottinger, instead, they retweeted incendiary messages in high volumes, thereby amplifying the narratives inciting violence in the name of #FreeZuma and #ShutdownSA.

After the riots, the CABC released another report that built on the May report and identified the top 12 Twitter accounts or “influencer bots” whose retweeting strategy was instigating violence and averaging around 562 posts a day – a figure which Peter said was highly suspicious compared to the average Twitter user.

“The role of social media is undeniable and indisputable,” said Peter. It is crucial that society has educated consumers that can mitigate against such incidents taking place, he said. 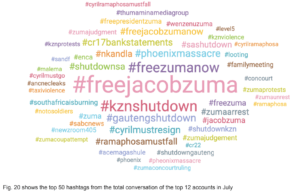 The top 50 hashtags from the total conversation of the top 12 accounts in July.

Media Monitoring Africa’s Thandi Smith said the decline of credible media and the rise of disinformation had created an environment where such incidents could thrive. She added that high-profile individuals retweeting inflammatory or suggestive content added fuel to the fire.

It is harder to take action against suggestive content compared to content that obviously incites violence, she said. Social media platforms alone cannot combat the problem, but the onus was on social media users too to flag harmful content on platforms such as Real411.

Read the full report, The Dirty Dozen & The Amplification of Incendiary Content During The Outbreak of Unrest in South Africa July 2021.