Syriacus Buguzi, is a trained medical doctor and science journalist who founded the publication, MwanaSayansi, the first science newspaper published in Kiswahili 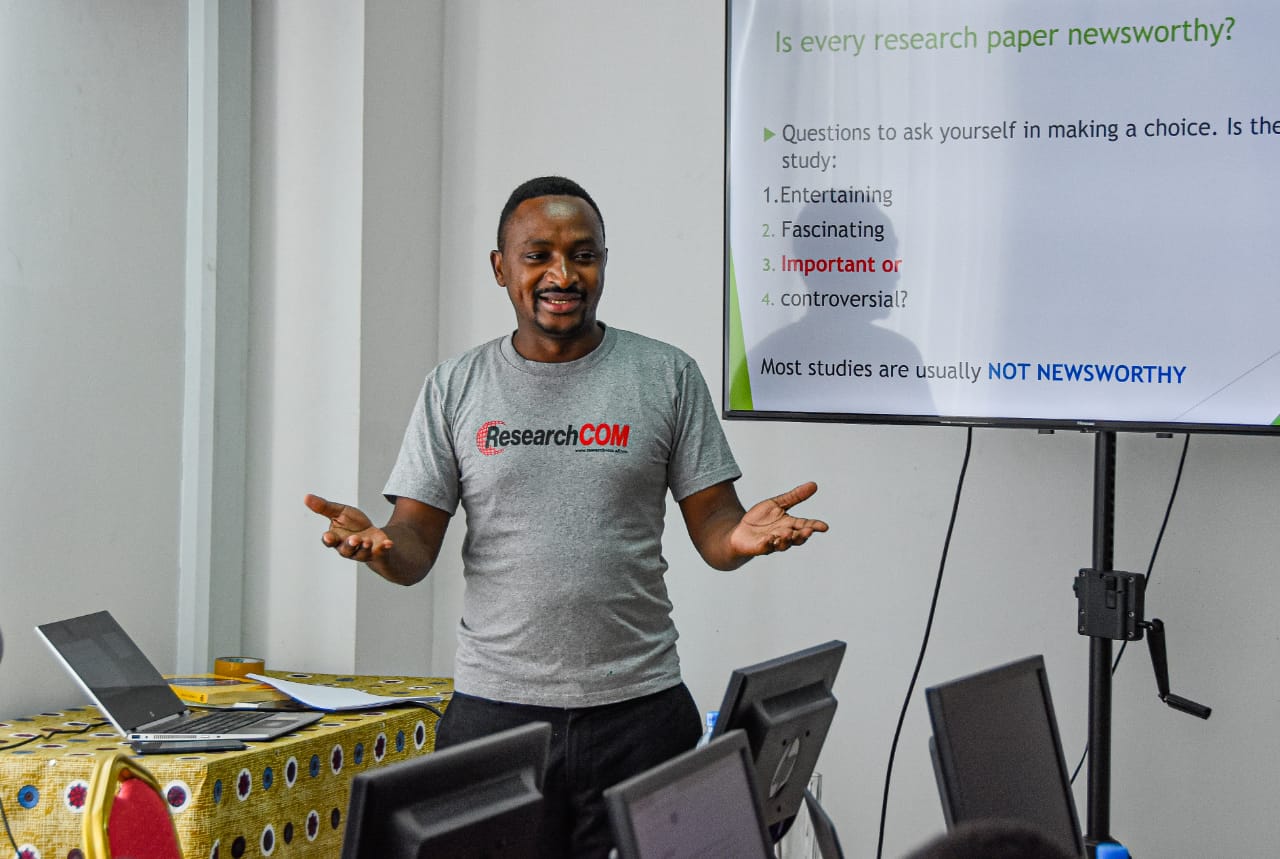 “My dream has always been journalism, and I have always wanted to blend journalism with medicine,” says Syriacus Buguzi, a trained medical doctor, who has been a science journalist for over a decade. We caught up with Buguzi to talk to him about his career as a journalist and the first science newspaper published in Kiswahili that he founded on February 14, 2022

MwanaSanyansi newspaper is a product of the startup company, that Buguzi founded, ResearchCOM. The research communication company based in Tanzania, uses science communication skills, science journalism and media strategies to inform society about science research and its impact on people’s well-being. “We leverage the fact that research can make an impact on people’s lives only if its communicated and brought to the attention of both policy makers and people whose lives could be improved,” said Buguzi.

Buguzi is passionate about raising the profile of Tanzania’s scientific research output and innovation through mass media. He works with local scientists and other journalists enabling them to communicate complex, jargon-laden scientific information in more accessible, understandable and engaging forms for the general public.

Buguzi said “through Researchcom.africa our science writers craft articles and produce a science podcast to keep the public informed about science research and researchers, medicine and science in Tanzania”

You are a trained medical doctor and moved into journalism, why did you decide to make that move? How long were you a doctor and how long have you been a journalist?

It is not about leaving, this has been a process. Whilst still in medical school, I participated in various activities including journalism. I was studying basic journalism while still in medical school at the Muhimbili University of Health and Allied Sciences in Dar es Salaam and I started writing articles and publishing articles firstly in the African Newspaper, in 2010 and then moved on to the Citizen Newspaper while still in medical school. By the time I completed my medical internship in 2013, my plans were to find a way to blend journalism with medicine, because I have always had dreams of doing journalism. In 2015, I needed to define myself, I had these big dreams and had graduated as a medical doctor and by then had started practicing at a private hospital, and I thought about what I wanted to do in the next 10 years and I decided to go into journalism. It has been a process than a matter of leaving one profession for the other.

Why did you start your publication, MwanaSayansi and what is the importance of having a publication that focuses on science and is published in Kiswahili?

During the pandemic, I learned that there was a gap in reporting scientific information to the public. The public in Tanzania predominately speaks Kiswahili, when you are reporting scientific processes/issues in English, you will likely get the majority of the population not getting the information. For a long time, I have always believed that scientific information doesn’t reach the end users in Tanzania, the majority speak Kiswahili and it was as if we were denying them the right to access information and during the pandemic that was evident.

Writing scientific articles or stories can be challenging as some scientific words can lose their meaning when being translated. How do you communicate a story effectively in Kiswahili without losing the silence?

As a science reporter, how do you ensure that your work is factual and accurate?

Being accurate and factual are the principles of journalism, and we abide by that. Before you speak of science journalism you need to speak of the basics of journalism. As a science journalist and a science newspaper, any conclusion we make needs to be backed up by scientific evidence. We decided to publish this newspaper, MwanaSayansi for researchers to communicate science with the public and what we produce is research evidence, we prefer articles that have been peer-reviewed and are reputable. We probe the science, we don’t just copy what has been written, we are critical of the science. Our number priority is t be accurate and factual.

How has the public reacted to your science publication?

The reaction was quite interesting, we got unexpected positive feedback. We were thinking this is a scientific publication there won’t be much interest. Many people said that it was long overdue – to have a scientific publication in Kiswahili. The positive responses have encouraged us to create and deliver more content. We feel more enthusiastic to create content that is interesting, intriguing, and scientific that is easily understandable and empowers people, we don’t want to let them down. We anticipate for this publication to become bigger and a huge audience.

What have been some of the highlights of your career as a science journalist?

I have completed a masters from the University of Sheffield, which is a major highlight and is an indication of my efforts to link science with journalism. The opportunity to publish my work in international publications has helped me gain experience, but the most important thing is the ability to publish a science newspaper in Kiswahili – it is an idea I had for a long time. I moved from being a medical doctor to a science journalist, the process was not easy, it didn’t happen overnight but making that decision was a big achievement.

What advice would you give to upcoming science journalists? Or journalists who are interested in reporting on science and health?