The struggle photojournalist, activist and jazz photographer has given UWC custody of his archive, with plans to digitise it and start an accessible photography centre 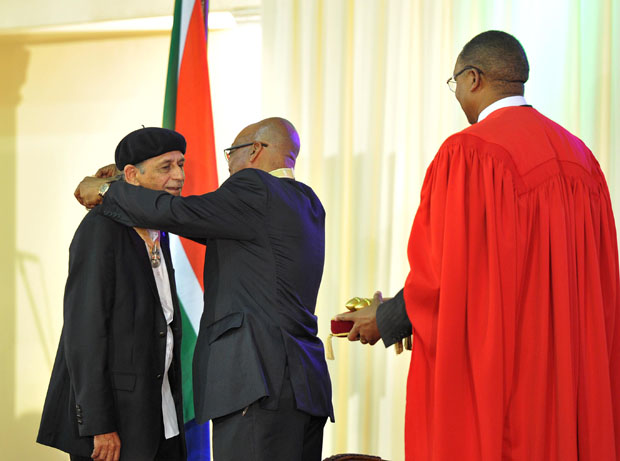 Rashid Lombard receives The Order of Ikhamanga in silver from former president Jacob Zuma during the National Orders Ceremony in Pretoria in 2014. Image: GCIS

Rashid Lombard’s home feels like a photo gallery. Images of all sizes line the passages and bedrooms as moments of history stare at you from the walls. The legendary photographer sits in his lounge with his wife Colleen and daughter Yana, in their home in Athlone, Cape Town. The family presence is important to him as they are central to ensuring his legacy endures.

A tragedy for many South African photographers is the disarray and neglect of their archives. This includes apartheid-era photographers who did not have the resources to preserve their collections. And once they are elderly or die, the responsibility falls to their families, who often don’t have the capacity to honour their archives either. Their legacies risk being lost forever.

This makes the project that Lombard and his team are starting profoundly important. He has handed the custodianship of his complete archive to the University of the Western Cape (UWC), with the rights remaining with his family. He is also starting the three-year process of digitising his archive, planning to open a photography centre guided by his vision.

Sitting in Lombard’s house, the strong connection between father and daughter is palpable. Throughout our interview, Yana works steadily on image captions. She often interrupts us – asking questions such as “Where was this student uprising?” – but is mostly deeply aware of each image’s context. In response, Lombard rattles off names, dates and places with remarkable precision. At 71, his memory remains sharp and he is able to recall vividly each moment in which he created an image.

Lombard’s collection consists of roughly 500,000 photographs made over 50 years, from the 1960s onwards. These include musicians and gigs, high-ranking political figures (including a significant portion on Nelson Mandela after his release from Robben Island), political protests and everyday moments of life under apartheid.

For now the massive archive lives at his home. As Yana says, “The archive has never been homeless.”

“This is the bulk of my negatives,” Lombard says, walking over to one of the rooms. He opens a cupboard filled to capacity with stacked files. Labels pop out: “Rivonia release ’89” and “Mandela Cape Visit”. Each file contains plastic sleeves with contact sheets, revealing the sequence of events – all the negatives neatly placed.

Next to the cupboard are stacked boxes filled with slides. “It’s all struggle-related, and there’s lots of music,” Lombard says, walking to a back room outside the house that is packed with even more boxes and files. This part of the collection contains hundreds of hours of video and audio recordings, prints, posters and flyers.

Lombard’s interest in creating an archive started in 1986, when he was deployed to New York to study and research archiving with the help of the ANC Movement’s art organisation, the African Arts Fund. Photographer Peter Magubane got him a placement at the esteemed Magnum Photos, under the lauded Eli Reed’s guidance. Here he was able to interact and learn from heavyweight photojournalists such as René Burri , Philip Jones Griffith and Susan Meiselas. “This is where my respect for the importance of a living archive began,” he says.

Returning to South Africa in 1987, he started working as the chief photographer at anti-apartheid weekly newspaper South Press, where Colleen, who was also an activist, was the office manager. At the time, she had the foresight to preserve his archive and started filing his negatives. Shortly after, Colleen was detained by the apartheid authorities for five months. After her trial was thrown out in 1990, she continued organising the archive. “That’s why it’s not scattered,” Lombard says. “It’s all in files now. All of the music is there, struggle, political figures… Colleen put it all in over the years.”

Handing over to UWC

Aside from his work as a photojournalist, many know Lombard as the founder of the esteemed Cape Town International Jazz Festival in 1998. He ran the festival as director for 16 years, leaving in November 2014.

Not one to rest, Lombard immediately started working on a plan for his archive, with Yana by his side. He wanted to preserve, digitise and move his collection into a building, and create a centre with affordable amenities for photographers.

For the past seven years, Lombard has been fine-tuning his plan. A few years ago he connected with UWC through Premesh Lalu, a professor at the university who expressed interest in preserving his archive. Discussions went back and forth, but it ultimately made sense for the university to be the custodian.

The focus of the centre is practical, not academic. It aims to house state-of-the-art equipment (darkrooms, scanners and printers) and be a space for learning. While the university was on board, it would not provide the budget. But Lombard was determined to find the money.

“We are writing a new curriculum. Training young people. Setting up darkrooms. We’re going to clean the negatives. The budget was millions but it didn’t scare me because raising funds for the university was easier than for myself,” he says. “In the end, we got all the money.”

Soon, his archive will be moved to the old Senate House building at UWC, once it’s renovated. It will live in a temperature-controlled, waterproof and fireproof vault to preserve the negatives. In addition, his team will create the photographic centre of which Lombard dreamed.

In essence, Lombard’s goal is to demystify and change existing models of how photography is perceived in South Africa. But the project is not only about him. “It’s very critical that we allow other archives to come in,” he says, aiming for other photographers’ work to be digitised – past and present – through the help of researchers. Currently, he is the custodian of late photographer George Hallett’s collection.

Lombard would also love to help photographers’ families set up proper trusts. He has found a model that works for him (introduced to him by the late Miriam Makeba) and wants to pass this on to others. “She taught me how to do this,” he says. His collection is in the Rashid Lombard Family Trust, which owns the rights, but UWC has access to certain rights according to their agreement.

The real work starts now. With his team, Lombard will start the archiving and digitising processes. Once digitised, his work will be available as an online, public-heritage resource – access is a driving force of the project.

The struggle photographer who loved jazz

Lombard is known for his high energy, animated charm and sense of humour. Across his life, he always did many things at once, and this spirit propels his work ethic. “I’d always find something to do,” he explains.

Lombard was born in Gqeberha and his family moved to Cape Town when he was 11 years old, in 1962. His love for photography was nurtured through art classes at Wittebome High School in Wynberg and an uncle interested in the art form.

While apartheid prevented him from studying photography, because he loved drawing he got into architectural drafting. This landed him a job at construction giant Murray & Roberts, where he worked as an industrial photographer of architecture, photographing buildings around Cape Town. “After that I realised I’m into photography,” he says.

Lombard’s quick-wittedness and hustler sensibility got him access to political rallies, which he’d photograph between jobs. All the while, he was following the music. “That’s why in my contact sheets you can see a funeral, then a party, then a gig. I was photographing all the time. I was at every gig,” he says. “The music was also linked to the political struggle. They were all involved. Not one musician ever said, ‘No I can’t play at this.’”

As a photojournalist, he became known as someone on the ground who could deliver, which allowed him to connect with foreign media, which would publish his work. During the 1980s, Lombard worked for the BBC, NBC, AFP and local progressive publications such as Grassroots.

In 1985, he set up the Cape Town Press Centre – a facility for foreign media – on the corner of Shortmarket and Bree Street. He ran it with renowned photojournalist John Rubython. “Everything was undercover,” he says. “We ran that facility until Mandela was released in 1991.”

It is near impossible to capture all the work that Lombard has done across his career, which includes running two jazz clubs, Rosies and Manenberg’s Jazz Cafe, hosting radio shows, producing for film, publishing books, exhibiting internationally and founding one of the largest jazz festivals in Africa.

Very little care and funding has been channelled into restoring and preserving the heritage of photography in South Africa. There is also a lack of accessible digitising equipment. The work of important Black photographers has not been archived properly, the same applies for more obscure photographers, hence pieces of history seen through their eyes are missing.

This article was first published by New Frame.