Behind the scenes of the latest video from comedy news show and Jamlab alum, Politically Aweh 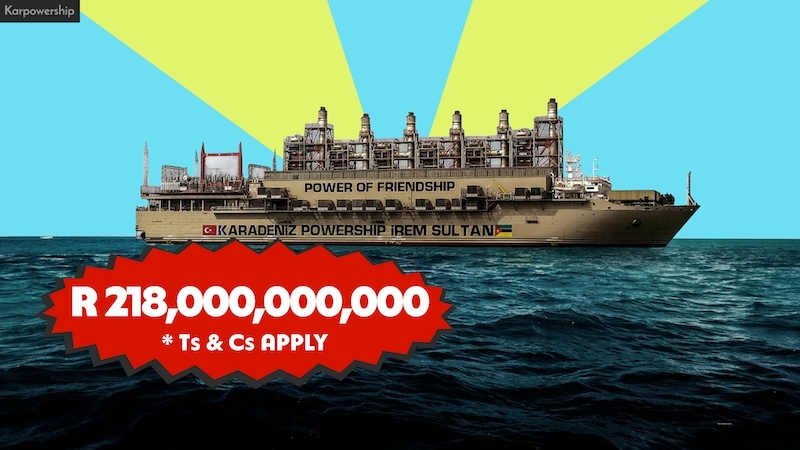 South Africa’s award-winning comedy news show, Politically Aweh, is back with another episode that will leave you in stitches while bringing you up to speed on a news story you might have missed:  government’s plan to procure “emergency” power from powerships to help end load shedding.

It sounds like a great idea in theory, but as Politically Aweh’s host, the beloved South African veteran comic Kagiso ‘KG’ Mokgadi, says in the episode, “when almost everyone says that the deal stinks, something fishy is going on.”

As it turns out, the deal with Turkish company, Karpowership, is very fishy indeed: A closer read of the “T&Cs” reveals that the South African electricity consumer will likely foot the bill for a 20 year procurement contract for an astronomically expensive R218 billion solution tied to gas imports and 20 million tonnes of planet warming greenhouse gases. Meanwhile, independent energy experts modelled an alternative solution based on renewable energy at less than half the cost that still met all of Eskom’s requirements.

These are just a few of the stunning facts packed into the 11 minute episode which features a mix of commentary, news clips, sketch comedy and pop culture references. “I think it may be our best episode yet, or at least, it’s up there,” says Stephen Horn, show creator and creative producer. “We really strived to push the quality higher than ever before with in-depth research, visual effects and sketch comedy.”

The team reached out to fellow SA YouTube satirist, Bearleii Sober, who commands an audience of nearly 30 thousand subscribers, for their first-ever YouTube collaboration. “It’s something we’ve been wanting to do for a long time,” says Horn. “Working with Bearleii Sober was an awesome experience – he turned around a news sketch shot against greenscreen in no time and put in a great performance.” Going forward, the team is hoping to collaborate with many other YouTubers locally and around the continent to highlight African satire.

On the research side, the team trawled through dozens of articles, videos and radio interviews, and even combed Lebanese news content with the help of a translator to find reports detailing Karpowership’s activities in that country. “The AI-powered Sonix.ai transcription and translation tool proved highly useful with that,” comments Horn. “You’re able to cut video really tightly from a translation provided by a human translator because you can verify individual words and phrases in both languages using the software.”

The team was also lucky enough to speak with the Programme Manager for Climate Justice and Socio-Ecological Transformation at the Rosa Luxemburg Foundation, Dr. Roland Ngam, to get the wider context behind the government’s motivations for greenlighting such a long fossil fuel based deal and to better understand the climate implications. “South Africa is built on fossil capitalism and it has been that way for more than a century,” Dr. Ngam tells viewers in the episode, before explaining energy minister Gwede Mantashe’s penchant for fossil fuels. “The interview with Dr. Ngam helped join so many dots for us in the writing of the episode, and was also an opportunity to record our first ever remote interview using Riverside.fm. It’s a powerful tool that offers the highest quality possible remote interview setup by recording both sides of the interview locally and then uploading the files,” adds Horn.

After a week online, the team is enjoying another successful episode launch with over 12,000 views on YouTube and counting, and high praise from some of the investigative journalists upon whose dogged work much of the episode content is based. “We’re just connecting the dots for people and adding gags to keep them watching, so we’re always very grateful to the journalists breaking these stories and doing the real digging. But the beauty of our brand of satirical explanatory journalism is it brings these vital stories to fresh audiences.”

Some smart comedy for your Friday afternoon ?

There's Something Fishy About The Karpowership Deal (ft. KG Mokgadi & Be… https://t.co/XCbJ0CHdOt via @YouTube

Meanwhile, the Karpowership deal may already be dead in the water in light of the Department of Forestry, Fisheries and the Environment’s (DFFE) rejection of Karpowership’s application for environmental permits a few days after the video’s publication. “It’s an evolving story, and we’ve heard Karpowership is planning to appeal the decision, but this is a very positive development and it’s nice to think we helped to play a role in raising public awareness about an issue critical to the future wellbeing of South Africa” says Horn.