Micah Reddy: The trials and tribulations of investigative journalism 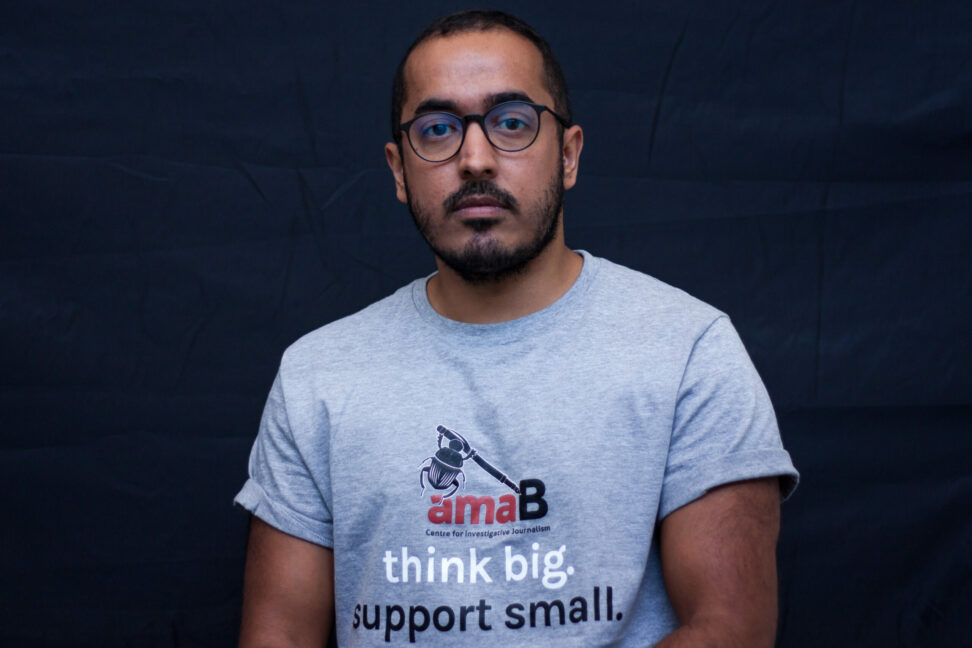 Before joining the amaBhungane team in 2017, Micah Reddy was the national media freedom and diversity coordinator at the Right2Know Campaign. He holds a Master’s degree in African Studies from Oxford University and a BA in History from Wits University. Reddy was managing editor at the Yemen Times in Sana’a and has worked as an editor and freelance journalist in Egypt, Palestine and elsewhere in the Middle East.

1. How did you get into journalism, particularly investigative journalism?

I always wanted to be in journalism – I didn’t study journalism, but that was partly deliberate [as] I had a particular interest in history and politics. I did an undergrad in African studies, but with a focus on history and politics, and I really enjoyed it and still wanted to be in journalism and thought about doing an honours in journalism, but my then supervisor advised that I continue with humanities and that the skills I gained are transferable to journalism. I didn’t do very much student journalism admittedly and I probably should have. I took a year off to travel and did my honours in history and then did a fellowship with the Afro-Middle East Center – which was research focused and I felt that those skills were transferable to journalism.

Then I did my Master’s and in 2012/13 a lot was happening in the Middle East with the Arab Spring and I wanted to learn another language. I went to the middle east and I moved to Egypt – at first to study Arabic but I also wanted to get into journalism. I ended up getting a job copy editing at a breaking news website called Cairo post – which had many problems. Looking back I had many reservations about the publication but it was a useful experience – it was a very fast-paced newsroom but it was editing and I really wanted to get into journalism. I got an opportunity in Yemen for a short-term contract and it was a managing editing position for a small Arabic/English newsroom and it was a unique beast in Yemen. It was an independent publication, which at the time was very rare in Yemen which had been targeted by the previous regime. After the revolution, the media environment in Yemen really opened up, but it was quite chaotic and unregulated. I worked at the publication for a short period and ended up moving to Palestine to freelance and then decided to come back home – to recoup some of my losses. I enjoyed being home and got a job in the media field as the coordinator for media freedom and diversity for the Right2Now campaign which works very closely with amaBhungane. I had always thought if I were to do journalism in South Africa it would be investigative journalism partly because I was an avid reader of amaBhungane articles. I liked the forensic detail that they uncovered and to me, they were a reputable, rigorous investigative journalism organisation. I got the opportunity to do a fellowship [with amaBhungane] for three months, there was a job opening and I have been there since 2017.

2. You have worked both as an editor and freelance journalist in Egypt, Palestine and the Middle East. What were some of the challenges/highlights of working in this region?

I got there after the Arab Spring, and the war in Syria was underway. The Arab Spring was fading and authoritarianism was on the rise again. In Egypt, it was a very closed, paranoid and hostile environment. There were frequent arrests of journalists and it was a very difficult environment. The regime was clamping down and there were violent protests every other day in the streets of Cairo. There was a military curfew but I wasn’t going out, primarily my job was sitting in an office copy editing for a publication. I wasn’t in the thick of it and I didn’t stay around for very long. I got the job in Yemen shortly afterward, and primarily I was trying to learn Arabic, not very successfully, but I was more invested with the Yemen Times job because it was interesting and meaningful. The media in Yemen was opening up, but it was absolutely chaotic. It was an editing position and I  spent most of the time in the newsroom, but there were real dangers for journalists and there were a lot of conflicts, it was a very unpredictable conflict, so it was sort of low-level guerrilla tactics and shootouts in the streets and bombings. Shortly after I had left, the bombing campaign started and the Yemen Times offices were badly damaged. Eventually, the paper had to close down and there were some really good journalists there.

3. As an investigative journalist for amaBhungane, how do you investigate a story or an individual safely whilst getting the full story?

It depends on the story but you also develop an intuition about safety and levels of threat. To some extent, you can assess these in a kind of methodical way, but there is also a sense of intuition. South Africa is a violent place, so you have to be careful, but there is a reasonable level of institutional support for journalists in mainstream organisations. For instance, with the Gupta leaks, we were able to get the kind of resources we need to take the necessary steps to protect ourselves. There were plans to evacuate sources and journalists.

One big threat is legal action and we are often able to get access to pro bono legal support or get access to war chests to be able to defend ourselves against litigious subjects of our stories, very litigious business people, and politicians. For instance, I wrote an article about an arms dealer who tried to slap us down with litigation or the threat of litigation to silence journalists. Legal protections are a big issue, people tend to think of physical protection when thinking of investigative journalism but for me, the much bigger, immediate and real threat that we face quite often is litigation. Safety is an issue for most journalists in this country – at least journalists reporting on service delivery protests and politics.  We deal with dangerous subjects and invariably our reporting upsets corrupt plans and ruins people’s lives – as it should if we’re talking about the corrupt and powerful – and that is part of the nature of our reporting.

We do get threats and there is a very real danger that our sources could face physical or violence but we do have resources. We assess the situation and determine what steps to take, for instance, if we are communicating electronically and feel that there is a reasonable level of threat of communications being intercepted, then we’ll use encryption. Or if we want a more foolproof solution you meet your source somewhere, where it is safer.

4. As a media activist, how would you describe the media landscape in South Africa. In terms of media freedom, are there restrictions and do you think more needs to be done to safeguard the safety of journalists?

There are threats to media freedom, and they are multi-layered. A big part of it is about structural economic threats to media freedom. For instance, we’re seeing newsrooms struggling, especially after the pandemic, newsrooms are going under, and they’re fewer resources available. That means fewer resources to protect journalists, fewer resources for journalistic safety and it means juniorisation [of the newsroom] and journalists being overstretched and having to do more and more with less and less. That creates a situation where journalists are often going to be unprepared. A lot of threat analysis is about just experience and intuition and if you have juniorisation and senior people leaving and fewer resources, it leaves journalists more vulnerable. There is a systemic level of threat and then there is the threat of policy regulations. The press climate is a conducive climate but the government has tried to implement some quite repressive laws and the rhetoric has often been very hostile to journalists. Despite efforts to pass repressive pieces of legislation like the secrecy bill, which would’ve been a very real setback to journalists in this country and to media freedom, despite those efforts, there’s been a lot of pushback from civil society and from the public.

5. How do you/have you dealt with personal attacks, harassment and general distrust of your work?

That is always going to happen, especially when writing articles that are critical of powerful, influential, corrupt people. I have written about the Guptas [and] we had these bot networks and very orchestrated disinformation campaigns directed against us, it was not something we’d experienced before at that sort of level. It was highly orchestrated, we had Bell Pottinger behind the scenes with the Gupta’s media empire directed at us, and then all these online disinformation bot factories. We learned a lot from that experience and how to deal with it and it’s a difficult thing to deal with disinformation, especially disinformation spread across social media. Social media has allowed disinformation to spread like wildfire and we live in a time of unchecked disinformation. For instance, I have written articles on the EFF and soon as it is published I receive endless trolling and people question the article. Automatically people are going to try and smear journalists or people will disingenuously question journalists’ credentials or the article. In most of those cases there’s no real meaningful engagement, it is smear campaigns and trolling and it’s an attempt to deflect or damage the journalist’s article.  It is hard to craft a strategy to respond to that because it’s responding to lies and to disinformation and you’re often having to prove a negative or disprove nonsense. How do you do that? And is it worth even entering into those sorts of debates or trying to point out these things? I think the main thing is to try not to respond directly, but rather try to build trust in our journalism which requires us to be extremely rigorous in our journalism and also take readers into our confidence and in as much as possible try and put the evidence out there.

6. What are your thoughts on the SA investigative journalism landscape? Is the industry doing enough to train and mentor up-and-coming investigative reporters?

I think there is always room for improvement, investigative journalism has demonstrated its worth in safeguarding and maintaining democracy and in holding the powerful to account and fostering a more transparent, open, and accountable society, but there are not that many investigative journalists in this country. Part of the reason is about the systemic problem, funding issues and the economic model of journalism and how that is facing serious strain. A lot of journalism in this country relies on donors because media outlets struggle to be sustainable in this market economy.

I think the one thing that has been very valuable to my career has been getting a sort of breadth of experience that journalism offers so many different kinds of areas of interest and options for people who are curious and want to try different things.

8. You’re a highly respected journalist, what’s the one thing you’d still like to achieve in the near future?