How can media organisations work together to establish a public sphere that serves South Africa’s needs? 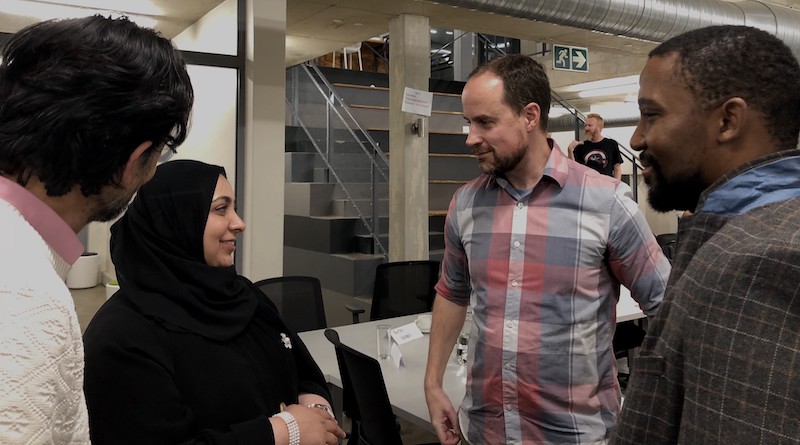 Journalism — news and information produced by people who check facts, who aim to separate information from opinion and who commit to distinguishing fact from fiction — has been hacked. Hacked, intentionally or not, by the online platforms — including Google, Facebook and YouTube — on which media has become highly dependent. And hacked by ‘bad actors’ like Cambridge Analytica, the managers of Gupta-bots and others exploiting the data and algorithms of the online platforms and who are intent on undermining trust in a common public sphere. How do we hack back and reaffirm the standards of journalism?

This month, senior editors, digital journalists, researchers and media advocates met at Tshimologong in a JamLab dialogue to explore our options to act.

South African Media and Innovation Program’s Siyabonga Africa, alongside Mail & Guardian’s editor Khadija Patel and Tiso Blackstar’s group digital managing editor Riaan Wolmarans led a discussion on finding ways of tackling the growing threat of ‘fake news’ and the slide in trust in public information. Other journalists in the dialogue included those from Independent Newspapers, SABC digtal news and investigative team amaBhungane. They were joined by advocates and researchers from Media Monitoring Africa and Wits Journalism.

The first ‘hack’ the dialogue identified was the decline in the classical advertising model, a product of digitisation and the role of the online platforms which increasingly control the transmission of information that journalists publish. Anton Harber’s article in the Financial Mail (paywall) late last year stated that Google and Facebook now took the majority of digital advertising income in South Africa, income that in the past would have gone to South African media.

This hack of the business model was also hacking the editorial processes. The editors in the room shared stories of how the ‘Chinese wall’ between advertising and content had fallen. As Patel put it: “Advertisers want more. They want content. I have to push back and ask what do they mean by content?”. Wolmarans agreed: “We’ve come up with alternative content, native content. They are making us more money. It does require a lot more editorial. You can’t rely on a sales person, you need someone on the digital side to work on the editorial side”.

Khadija acknowledged these “insidious forces” and added that, “once we lose the ability to push back we might actually shut down.”

The second ‘hack’ came from sites mimicking news sites. Indra de Lanerolle suggested that it was difficult for readers to spot the difference between sites like SA Breaking News which copy content from news sites without attribution or Mzansi Stories — one of the sites identified by AfricaCheck as a publisher of ‘fake news’ — and genuine news sites like TimesLIVE or News24.

The third ‘hack’ was being conducted by actors committed to undermining trust in media. While the research suggests that the Guptabots had been rendered largely ineffective, participants raised concerns that with an election coming within the next year, there was a serious threat that other actors could mount disinformation campaigns similar to those run by Cambridge Analytica in the US election and the UK EU referendum.

These ‘hacks’ required a clear response from journalists and media houses. Wolmarans argued that it was not enough to expect readers to ‘magically’ regain their trust in the media: “The internet is a minefield of fake news,” he said. “For journalists, making this differentiation for the audience is something we’re supposed to do but we’re not doing it.”

Africa agreed that as journalists we had to do a much better job at “communicating why our own spaces are where verified and truthful information is found as opposed to fake news or disinformation… so people can see that we are the trusted source.”

This led to an interesting discussion on the opportunity for news organisations and journalists to collaborate in communicating how real news is different and why. As Africa suggested, this would require a large-scale media literacy campaign. Micah Reddy, from amaBhungane suggested that we could build on existing institutions — especially the Press Council and the Press code — to help people that helped define the distinction between journalism and fake news. The discussion ranged from extending the role of the press code—on a voluntary basis — to online only services that have not been part of the Press Council to date, to building a collaborative brand and trust mark that South African journalism organisations could all include on their sites, stories and apps. Another area of collaboration raised, based on research by Phillip de Wet, was to pressure advertisers who were supporting fake news sites, probably inadvertently through programmatic advertising.

There was some acknowledgement that the effects of the hacking of business models had played a part in undermining the media’s case for being trusted. Riaan argued that the move to paywalls offered an opportunity for media to push back against the slide in quality. If people were paying for the content they would expect and demand more.

De Lanerolle, the director of JamLab and chair of the discussion, closed it by expressing the hope that these calls and ideas for collaboration would be taken further and offered to convene further meetings if there was interest.