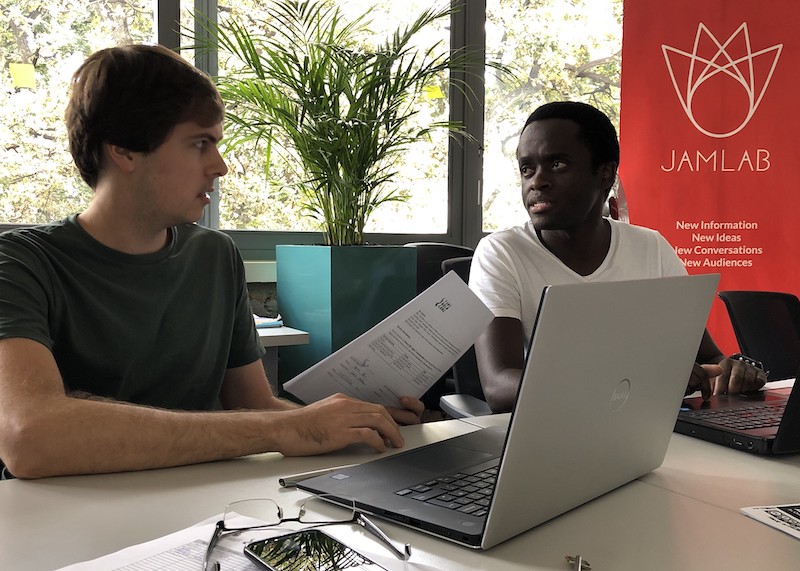 In this week’s taster to the Journalism and Media Lab (JAMLAB) accelerator programme team’s series, we introduce you to Politically Aweh.

Politically Aweh is a satirical show that delivers informative and entertaining videos about news & political issues in South Africa. It is produced by a team of seven young professionals working in journalism or politics. Copywriter and social media producer, Tyson Ngubeni and creative producer, Stephen Horn are representing the team on the jamlab accelerator programme.

The show is inspired by a mixture of various other satirical shows from around the world like Last Week Tonight with John Oliver, and Newsbroke on Al Jazeera+.

“Internationally, there’s a lot of offerings and there’s just nothing here. There’s a massive gap in South Africa… And I think that it will work. It’s just a matter of slogging away and getting it connected to the audience,” said Horn.

He says in South Africa, it’s rare to find a satirical show infused with proper journalism.

“It’s quite amazing. We kind of have them separated into two different camps in South Africa. Carte Blanche, eNCA and all those other guys on one side and your Trevor Noahs and people tuning in to Loyiso Gola’s Late Night Show back in the day when it was on, Chester Missing now, in a more comedic space.”

“And we thought, what could happen if we could just combine the two and get the comedy, some jokes, to help deliver important journalism and actually do original journalism with what we’re doing,” said Horn.

So what is Politically Aweh doing differently to other satirical shows around the world?

“Those particular shows are issue focused from show to show. There’s a genuine attempt to try and distil a lot of the conversations that are happening from a politics and analysis standpoint into something digestible,” says Ngubeni.

“So instead of doing something satirised, we are distilling something that has happened and doing it in such a way so that we presenting it in why that is this important to you.”

Over the six months on the jamlab accelerator programme, the teams aim to learn how to grow their audience and turn their shows into a financially sustainable product.

“I suppose throughout out our jamlab experience we are aiming for consistency because that’s been our biggest failing,” said Horn.

“There are many failings on my part in terms of leadership and project management stuff. I just don’t have the experience. I’m more of a creative mind. I’m a video editor by trade. I love storytelling and cutting content but like how do I build this thing?” Horn adds.

Another challenge the team has been faced with is producing episodes regularly.

“We’ll drop an episode then a month later or maybe five months later we’ll release another one. So over the past year and a half, we’ve released five episodes,” said Horn.

He says the team aims to publish at least one episode every two weeks.

The Politically Aweh shows can be found on YouTube and other social media platforms.