Ishiwi radio show taken to the people in Zambia 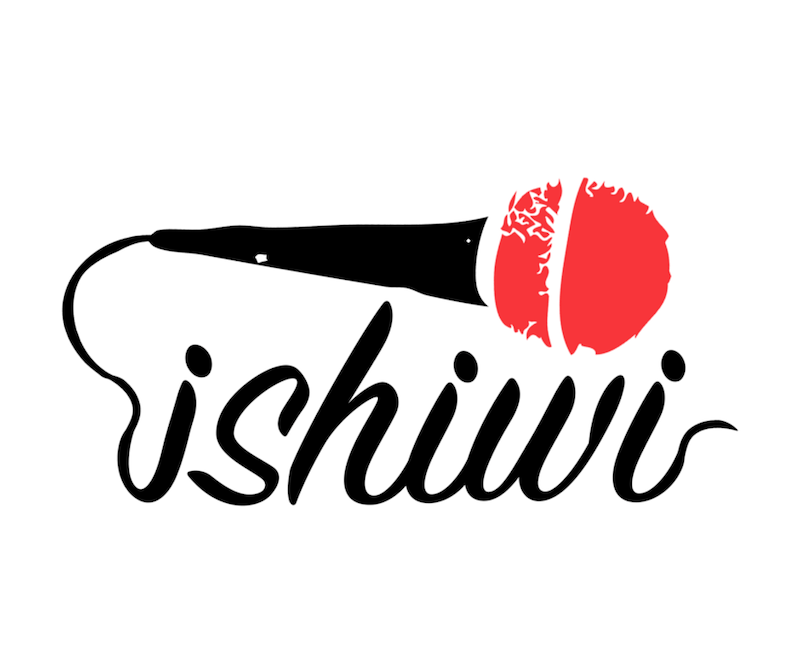 In the small village of Kabwe, about 144 km outside Lusaka, the Zambian capital, Matongo Maumb, is training young volunteer journalists on how they can report on elections and violence that may occur. “They did a simulation in the training on how they will give a good report and capture young people during the elections,” says Maumbi.

It is August 2016, a few weeks before Zambia’s elections. Concerns are rising over the political violence and local media restrictions, as well as economic problems caused by the drop in the price of Zambia’s main export, copper. President Edgar Lungu, who has been in office for just a year and a half is going up against Hakainde Hichilema of the opposition United Party for National Development (UPND). Lungu had taken office in January 2015 following the death of President Michael Sata. 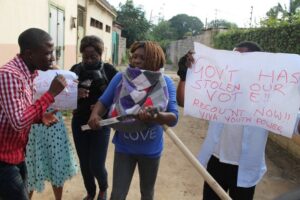 Part of the training includes a simulation where a protester holds up a poster with the description: “Government has stolen our vote, recount now”, preparing the young reporters for a scenario where the elections are marred by violence.

A few weeks later violence did in fact take place. At least three people were killed during the campaign with regular clashes erupting between supporters of Lungu’s Patriotic Front (PF) and the UPND. Skirmishes continued until polling day, including fighting in the streets. The young reporters from Kabwe and surrounding communities were prepared. Ishiwi listeners, who are mostly youth, were kept abreast with election updates.

Ishiwi, meaning My Voice in the Bemba language, was established to fill a void. The radio show broadcast on KNC Radio is targeted at young people and is run by young people, giving a voice to what was once a voiceless youth in its surrounding communities.

Maumbi coordinates and mentors the young people at Ishiwi. He says no one talks to young people directly. “When there are special programmes on radio, young people do not tune in. We called the show Ishiwi, and decided to go local to reach a local audience,” he says.

The radio show is broadcast live by a young production team and features young contributors and well-known personalities and has been running for the past three years. The initiative is supported with training and mentoring by the British Broadcasting Corporation’s Media Action where Maumbi works. On this weekly interactive magazine show, topics can range from elections, political violence and Zambia’s bill of rights. The show runs for 45 minutes every week.

Prior to launching the show, the team did a pilot and pretesting in the Kabwe community. There were a lot of learning points along the way. What makes this show unique is that they do not invite experts who would talk down to Ishiwi’s youthful listeners but people who speak “their language”.

“We bring someone who can talk on their level. Most of the shows have music in order to keep the youth engaged,” says Maumbi. 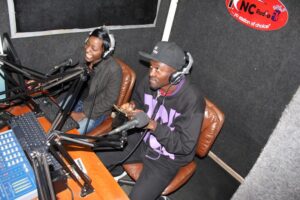 A Celebrity Guest with the Ishiwi female presenter live on radio. BFlow is a popular musician and uses social media even while on air. Image: ISHIWI

He says volunteer community journalists are at the heart of the production. They are trained to do the basic of journalism and they go to community to talk to young people. But he laments that women don’t like talking to them, but boys do talk.

“Females don’t talk on the shows because of social norms. Women are shadowed by men and they think their role is in the kitchen. We’ve tried to invite female councilors to come on different shows,” says BBC Media Action Plan’s Kayula Mwila.

In making sure that the show has impact in Kabwe and its surrounding communities, Mwila says they set up The Listening Club with Ishiwi listeners.

The Focus Groups Discussions, which is a group of people, were asked about their perceptions, opinions and views towards the Ishiwi Radio Programme. Questions were asked in an interactive group setting where participants were free to talk with other group members.

The Listening Clubs however, are run differently. The Clubs are grouped in five age group categories: 15–17 years, 18–20 years, 21–24 years, 25–30 years, 31–35 years. Each community in Kabwe has one group of not more than 15 participants. Age groups found in each community were randomly selected with an assumption that all the age groups have a high probability of being found in each Community. In total 10 Listening Clubs were formed across all the 10 communities.

The Ishiwi Listening clubs are all mixed to get detailed views from both sex across all communities. Young people in the Listening Clubs have worked as a support group for the programmes and their advice is taken into account making each programme useful, educative and entertaining.

“The Listening Clubs have been very helpful to keep up with the ever changing and dynamic media consumption trends for young people. What better way to get feedback from the young people themselves, in a safe space,” says Maumbi.

“In addition, Ishiwi conducts discussions on a regular basis to understand if the programmes are helpful to young people like them. At the end of each monthly discussion someone from the research team writes a report, based on all of the views and the suggestions that were collected.”

The listening club’s feedback ensures that the community journalists working on the programme get immediate feedback and adjust their shows and improve content for the listeners. 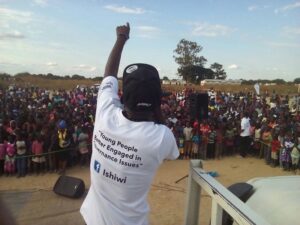 Ishiwi also goes onto the road, where it is taken into the community through roadshows that feature musicians, celebrities and outdoor debates. KNC Radio partnered with “Music for Change” roadshows in partnership with BBC Media Action aimed at promoting good governance and citizen participation in the governance system. Through the roadshows, Ishiwi is able to encourage the community members to remind elected leaders to fulfil their campaign promises.

The programme also engages with its audiences through call ins, and also via Facebook, Twitter and WhatsApp.

Ishiwi has also found new innovative ways of engaging with its audiences on social media. Maumbi says “Young people in Kabwe are mostly on Facebook. We use cartoons with dialogue boxes and ask followers to fill in what they think the characters in the cartoon are saying. We are getting a lot of feedback for that because young people like that,” says Maumbi.