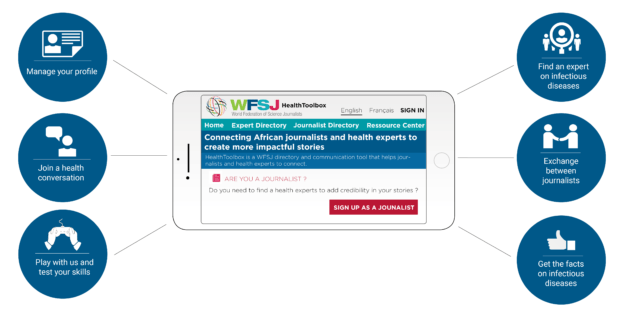 An outbreak of the Ebola in Western Africa around 2014–2016 highlighted the importance of the media during public health emergencies. But this outbreak came with its own communication challenges that included biased information, lack of tools, resources and know-how.

The project is still in its infancy. We spoke to executive director at the WFSJ, Anne-Marie Legault.

How did the idea for the Health Toolbox come about?

The Health Toolbox is a very simple portal that we designed coming out of a project that we managed between 2016 and 2018 on the challenges of communicating on infectious diseases during outbreaks in Sub-Saharan Africa. When we went into this project, we quickly realised that the journalist on site really wanted to report on the facts and offer the correct information but they just didn’t have access to experts for various reasons depending on the country, and the situation internally. And so information was just not circulating and because information was not circulating and they didn’t have access to experts, they could not report. And then rumours started to circulate and caused a lot of damage that you probably know already. So we said, well, what can we do about that? And one of the suggestions that were given in our focus groups — because we talked to, of course, a lot of journalists and we had lots of training on the ground — was that they wanted to have access to experts.

How does the Health Toolbox work?

We designed this basic portal where you can have access to a directory of experts in sub-Saharan Africa. Most of them are African experts. And it’s a simple login. You put in your basic information, then you have access to the experts. And the same goes for the experts. They can log in, put in basic information and then they can call back journalists. Of course, ideally what we want is people to put as much information as possible on their profile so they have a better credibility and they can start building the trust, and the relationship.

On the platform, how does the journalist contact the researcher or expert?

You can have access to everything without logging in but if you really want to contact people, you really want have details of the profiles of people contacting each other, you need to have a profile. So you get access to a little bit of information, the research centre, the blog… we created, also, an online game called Sci-Jo — short for science journalism — where reporters in Africa can test their skills on basic science journalism skills.

Once you find an expert, you can send them an email directly in the portal because his email is there, his telephone number is there and the system automatically sends an email. It’s very simple technology and we wanted it that way. We didn’t want to make it complicated. We wanted something to be accessible. It’s the first step obviously because, you know, with the resources we have we said what can we do. Because we’re a small NGO but we can build capacity, we can build skills development for science journalism across the world.

What’s the reception of the platform?

So far, I find it’s a tool that’s pretty much used. When we launched last year, we had about 30 or 50 experts that were logged in and about 65 journalists and now we have 200 journalists and just about 100 experts. We did lots of publicity in our network, among the member associations, among our newsletter and people really caught on. And then after that, it’s really up to the users to create the linkages and create the conversations going.

Well, it’s not so easy. It’s not perfect, obviously. There’s going to be some little mistakes. What we try to do is when we see a profile of a journalist or an expert that doesn’t have a lot of information, I try to email them and say, you know, you have to put more information, people won’t be able to find you, they won’t know exactly what your work entails. Try to put more information. And if nobody really answers, sometimes I can take the profile out completely. I try to curate on a regular basis. But of course, we’re a small NGO, we’re based in Montreal and we have a lot of projects so that’s part of our challenges of being an NGO. But we encourage, of course, our member association and our users to tell us, oh you know, ‘we tried to pair up with this guys and he never answered’ or ‘we know he exists but he just doesn’t answer’ and that’s something… that’s one of the challenges we see a lot.

Can you name some of the countries where you have journalists who have signed up onto the platform?

Pretty much all of them. Most of the Sub-Saharan Africa countries. I’m looking in the platform and the most users are coming from South Africa, Nigeria and Kenya —but we have some from pretty much everywhere. So we have a lot of people coming in from developed countries — Italy, Great Britain, Canada — which is kind of strange.

We also added some experts that are maybe funded through French or British science institutions but are based in Africa. Even though they are French or English, I still put them in there. And I still invited them to join. So, yeah, at first we were calling the institutions and asking them, oh, would you mind being part of this and we really made a lot of phone calls, we emailed them, made sure they knew what they were getting into even though it’s a small engagement. It’s just another way for us to find experts faster.

What are some of the challenges you’ve come across with this platform?

We find that — one of the challenges that we find is that even though there’s an extra access to finding an expert, experts sometimes have been seen to reproduce the exact same behaviour that they’re used to doing. Before you had the portal, you would call an expert and he would never call you back. It would be frequent. Well, now they seem to do the same thing. They email through the portal even though their very institution is fully engaged in the process and they don’t pick up the phone, they don’t answer, they don’t respond. So it’s one of the things that we hear a lot. So it’s just part of, I guess their busy schedules and having maybe the nature of the game where you have to really build the trust between the journalist and the experts and there’s no other way to do it, than being persistent and consistent and quoting them correctly and being very rigorous and accurate. And the more you do that, the more credible you’re going to be and the more the experts are going to want to talk with you.

What are some of the plans for the future for Health Toolbox?

I think an open forum would be a good idea. Another plan would be making it more interactive and creating new themes, creating new topics. I think that would be ideal. We would like to make expert directories in other topics: Agriculture, food, mathematics, cancer, you know a whole bunch of other topics.