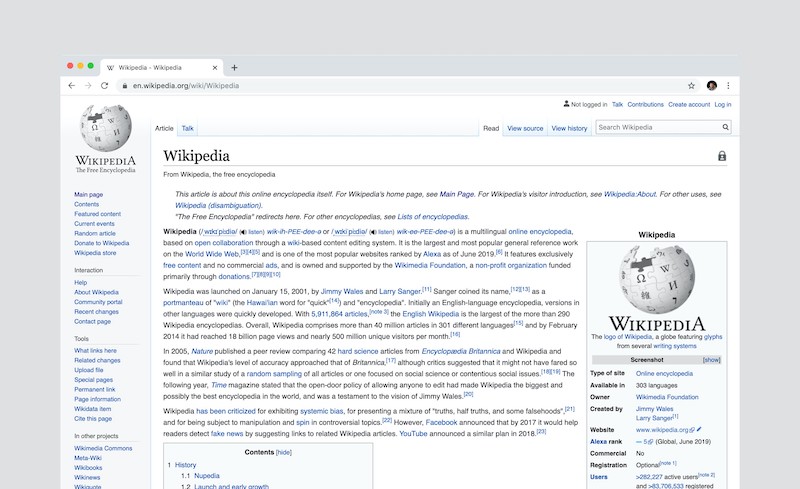 The free, crowd-sourced encyclopedia is likely to be one of the first hits on any basic internet search, but Wikipedia can be a powerful tool for African journalists in their work.

The website has over 6 million entries in English, and around 340, 000 active users writing in over 280 languages in total. It is almost two decades old and broadly ranked as one of the world’s most popular websites.

Bobby Shabangu, a director at WikimediaZA in South Africa, says “journalists can use it to get a body of references in a centralised platform from the references collected in the Wikipedia articles or use it to fact check a story or profile of an individual and also use the news portal of Wikipedia to write and inform the public about current events.”

Abubakar Idris, a tech journalist at TechCabal based in Nigeria, says, “I think Wikipedia is a great journalistic tool that provides a snapshot or basic understanding of anything. However, it requires more fact-checking than other tools.” He explains that this fact-checking may include looking at whether the URL of sources seems credible and reading the information at the source.

Jonathan Rosenthal, Africa editor at The Economist, agrees that it is a good place to start. He says, “I think it’s quite useful as a sort of entry point to try to understand topics, countries or regions, but I mainly see it as the beginning of someone’s research, not the end.” Rosenthal finds Wikipedia beneficial in summaries often complex subjects and sourcing information from a variety of places.

Rosenthal’s newsroom has a strict policy of fact-checking, and Wikipedia entries are not seen as a credible source in itself. However, using the source list of entries to find original documents and checked for authenticity and accuracy is a good tool. He comments that in recent years Wikipedia has started archiving material or linking to archives such as the Wayback Machine, meaning that journalists may be able to find documents or websites that aren’t easily accessible anymore.

Shabangu advises that journalist can challenge information. He says, “if they feel unsatisfied by the way it was written they can escalate this to a discussion forum where a voting system will be conducted on the neutrality of the content or authenticity of the references used, and a consensus then will be reached to rephrase, add more references or delete the article.”

While many may have used Wikipedia to read articles, there is functionality for journalists and anyone interested.

Rosenthal’s tip is to use the functionality in tables to sort information according to a particular column or row, which makes it easier to find what you are looking for.

While Wikipedia is often scant on content for those who speak only local African languages, Rosenthal says the different linguistic part of the website may offer an opportunity to access different content. He says, “it’s often quite useful, especially when we’re dealing with former Francophone countries, sort of looking to the French entries rather than the English.”

For a deeper dive around controversial topics, president of Wikimedia User Group Nigeria, Olaniyan Olushola, advises looking at the ‘view history’ tab on an entry to see every change made to that entry including discussion or ‘talk’ around these changes.

From here, journalists can click through to further page statistics including the age of the entry, which may be important to verify if the article about a recent event is accurate. There is also information about the amount of editors involved. While the latter could provide interesting insights, Olushola does advise “you can’t depend on this” because usernames are often obscure or pseudonyms.

Olushola also points towards the Pageviews section under ‘view history’, which allows one to not only see how popular an entry has been over time but to compare different pages, for instance, those of various politicians in an election.

Another trick, says Olushola, is that “it is very easy for journalists to navigate Wikipedia if you use categories.” Wikipedia articles are sorted into a variety of categories that it falls into. For instance, if one scrolls to the bottom of the entry about Uhuru Keyatta, the list of categories includes not only the more obvious ‘Presidents of Kenya’, but the more subtle such as ‘Children of national leaders’. Clicking through to a category page will lead to a list of subcategories, such as ‘Sons of national leaders’, which will then give an alphabetical listing of the pages that fall into that subcategory, such as Duduzane Zuma.

Similarly, journalists may find important sections and noteworthy aspects of a topic by exploring portals. Here one finds a wide variety of information about broad topics, such as COVID-19. When looking at the portal for Senegal, for instance, one find some of the same basic facts about the country as on the Senegal Wikipedia entry, but also links to other particularly interesting connected information, such as a selected Senegalese biography.

Wikipedia also has various sister projects under the Wikimedia Foundation, that may add more to a journalist’s work but are easily overlooked. This includes a media and image repository, free textbooks and manuals, and collections of quotations. Olushola advises journalists to particularly note Wikidata for in-depth data.

The current events portal, which is also featured on the English Wikipedia landing page and was mentioned by Shabangu above, includes links to entries of events that are ongoing, such as protests, and recent notable deaths, which may be useful for journalists. There is also a separate Wikinews website full of crowd-sourced news.

While journalists may principally think of Wikipedia as a source, it could also be a way for journalists to add to crowdsourced knowledge.

There seems to be a particular need for more content and collaboration around topics particular to Africa. For instance, Idris says he had tried adding to articles in the past but didn’t continue. He does say that while he uses the tool for international information regularly, he struggles to find detailed entries on African startups on Wikipedia for his work.

Shabangu, who has been editing Wikipedia articles for six years, says he particularly focuses his editing on African languages and content to preserve and increase this knowledge. He says, “journalists should contribute on Wiki because they are on the front lines of current affairs, and they want their story to reach many people or simply want to drive traffic to their work.”

He advises that it is good to start with small contributions to the Wikimedia community to gain trust, such as editing grammar or translating content. Journalists contributing their knowledge to stories that may seen obscure can have a lasting helpful impact.

Shabangu gives the example of “a government official who is all of a sudden promoted to a position and no one really knows about them.” He says that there may not be much public information about them online otherwise, but had someone made a short Wikipedia entry previously, there would be a stronger record of them.

Wikipedia may be the go-to for looking up a quick definition, but for journalists, it can be an interesting trove of information and sources, while opening up a different channel of content creation.

Olushola summarises the potential with a quote from Wikipedia co-founder Jimmy Wales. “Journalists all use Wikipedia. The bad journalist gets in trouble because they use it incorrectly; the good journalist knows it’s a place to get oriented and to find out what questions to ask.”