How storytellers in Uganda, Sierra Leone and Kenya are using mobile journalism to tell compelling stories 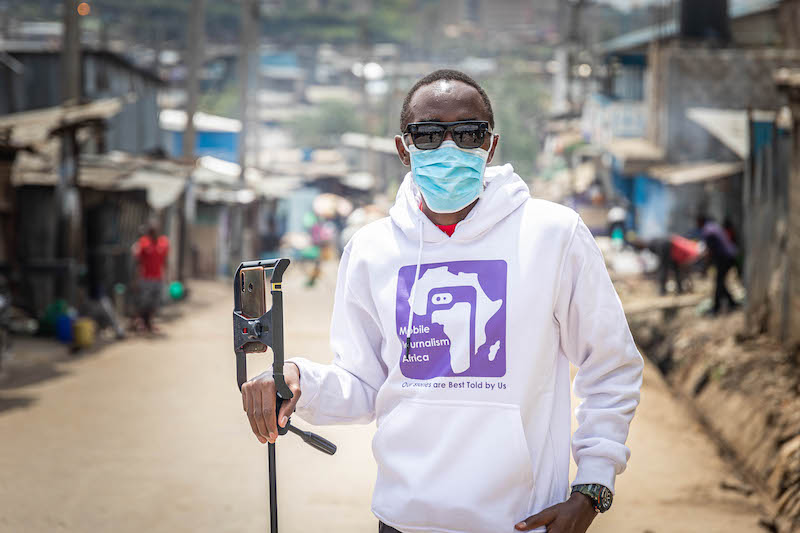 It was while volunteering at a hospital in Sierra Leone during the Ebola outbreak in 2014, where a woman suffering from ulcers was wrongly diagnosed and admitted for Ebola, that Sallu Kamuskay’s mobile storytelling journey began. “During that time, I saw so many things happening around me, but I didn’t have an expensive camera to tell this story but I had a phone, so I decided to share the stories like this on social media,” he says.

Storytelling through the usage of a mobile phone is a growing practice in sub-Saharan Africa. Journalist’s are able to gather, edit and publish news all through their smartphone. And this growing trend is changing the way stories are being told. Three mobile journalists in Africa share how they are using their smartphones to tell stories of African’s through the lens of an African.

Kenyan mobile journalist, Emmanuel Yegon is one such innovator, who says his organisation’s goal is to grow the number of storytellers across the continent and “re-telling African narratives, for a very long time. Africa’s story has been told by people from outside and usually their lenses are biased,” he says. Yegon and his former final year classmate at Moi University, Marvin Gakunyi created Mobile Journalism Africa, a platform telling stories from different locations in Kenya using a smartphone.

He says he created the platform for journalism students to successfully transition from university to industry. He added that journalism is a “flooded-industry” with very little opportunity, therefore, Mojo Africa would be a platform where young journalists build their journalism portfolio.

Telling stories from an African lens

“We have a lot of stories on disease, hunger, crime, violence and poverty and some of these are our realities, but we want to change how these stories are told by enabling people to tell their own stories and I think the easiest way to do that, is using smartphones,” said Yegon

The Mojo Africa team refers to smartphones as a ‘pocket-studio’, with Yegon explaining that people already have cellphones, making it easier for them to capture stories. “We are in control of our own narrative, so even when we tell our realities we are telling this through our own lenses and our own experiences,” he said.

Kamuskay remembers how his mobile storytelling journey began in a Sierre Leone hospital. He says the woman who spurred this desire to tell stories through mobile was not only wrongly admitted and diagnosed, but couldn’t afford to pay for the health care.

When Kamuskay shared the story on social media, people donated money and the woman was able to receive and pay for the medical care. “After telling that story using my smartphone, I realised the power of a smartphone to tell stories,” said Kamuskay.

Kamuskay subsequently created SaloneMessenger , an online platform which allows activists, journalists, storytellers and people from the rest of the continent to tell their stories. “Regardless of where you are, you should be able to tell your story with your available resources,” he said. He emphasised that young people should not wait to have the most expensive gadget to tell a story. “We should be able to use what we have to tell stories, every minute, every hour something is happening somewhere,” said Kamuskay.

What makes Salone Messenger unique is its efforts on human interest stories, while mainstream media houses in Sierra Leone focus mostly on politics, “we do stories where people can take action and change the mindset of people,” Kamuskay explained.

In Uganda, Silas Muwonge said that mobile journalism is an untapped form for reporting and it was easy for him to get into mojo as he already had a smartphone. Muwonge is the mobile journalism editor at Minority Africa, a solutions journalism based digital publication which tells “stories of minorities through a multimedia approach that is data-driven, immersive and interactive”. “We use available facts in the public domain to give truthful and insightful information about minorities,” says Muwonge.

At the core of their mobile journalism work, Minority Africa’s goal is to democratise and decentralise the power of who gets to tell minority stories which in turn, will change the perspective and the quality of mojo stories. To do this work, the team is building a network of experienced mobile journalists among minority groups by sharing mobile journalism toolkits that can be used for storytelling, says Muwonge.

The challenges that all three mobile journalists have faced are a lack of resources and people’s unwillingness to be interviewed using a smartphone. “People don’t feel comfortable to tell their stories without expensive equipment,” explained Kamuskay.

The mojo editor explained that they have struggled to make people understand that smartphones are a powerful tool to tell stories, as mobile journalism is fairly new in Sierra Leone. The mobile journalist who works with a team of seven, said that due to limited resources, they are unable to do field reporting on two stories at the same time and have to share equipment with each other.

Even though it has been difficult to tell stories using smartphones, the response and the change interviewees have had after their stories have been published gives Kamuskay hope.

“The biggest challenge was that people did not take us seriously when we appeared with a smartphone but that has since changed since 2020 because of Covid-19 as journalists had to interview people from their homes,” said Yegon.

Muwonge said it was tough reporting as a mobile journalist in Uganda and at times he has been mistaken as a bystander, “so if authorities or police start beating up people at maybe a crime scene, you end up having your press freedom violated in that you can’t tell the story as they assume you are someone who is just standing by the crime scene”.

He has since started wearing a press jacket which allows him to be easily identified by the authorities.

In Sierra Leone, Kamuskay said due to Covid-19 they’ve had to change and adapt how they interviewed people by using online platforms such as Zoom

Before lockdown measures were introduced in Kenya, Mojo Africa used to provide in-person training for young mojo storytelling enthusiasts which was one of the ways of getting an income, but due to the pandemic, they’ve been unable to. Yegon said that it has been a challenge having to cancel all their upcoming training. Due to restrictions, it has been difficult for Yegon to film people and he said that they needed to take Covid-19 precautions when filming people.

The Mojo Africa co-founder said that during the lockdown, he could not leave Nairobi, as it was better to film stories in other parts of Kenya, which limited the types of stories he could film. Even though he has a press card, he still is unable to travel due to the limitations placed on public transport during this period, as they are prohibited to operate outside of Nairobi.

However, though “the pandemic has presented a lot of challenges for us, when people get an opportunity to have their voices heard, they speak out,” said Yegon. “When we go out and tell them we would like to highlight these issues, they speak freely.” He explained that due to Covid-19 there has been willingness from people to be interviewed and tell their stories.

Muwonge on the other hand, said he has not been able to do in-person interviews, and resorted to platforms such as Zoom.

“There is no other person that can tell your story than yourself,” said Kamuskay, explaining that when people search for Sierra Leone on the Internet, what comes up is war and Ebola. He wants to tell human-interest stories, which are positive and show multiple sides of his countryman.

He said their approach to storytelling is solution-based, where they tell stories which have a solution or provide a solution. They focus on challenges that Kenyan’s may face, but also look at what is being done to address these challenges.

Yegon said that storytelling does not change but technology does, it has improved the way stories are being told by introducing new perspectives and by delivering these stories faster. He and his team use Snapchat spectacles to capture stories, which gives the audience an intimate view of a story.

“People are starting to appreciate the smartphone as a tool for storytelling,” he said.