In 1988, Aggrey Klaaste became the editor of Sowetan and launched a project to intervene in the fraught political situation in South Africa 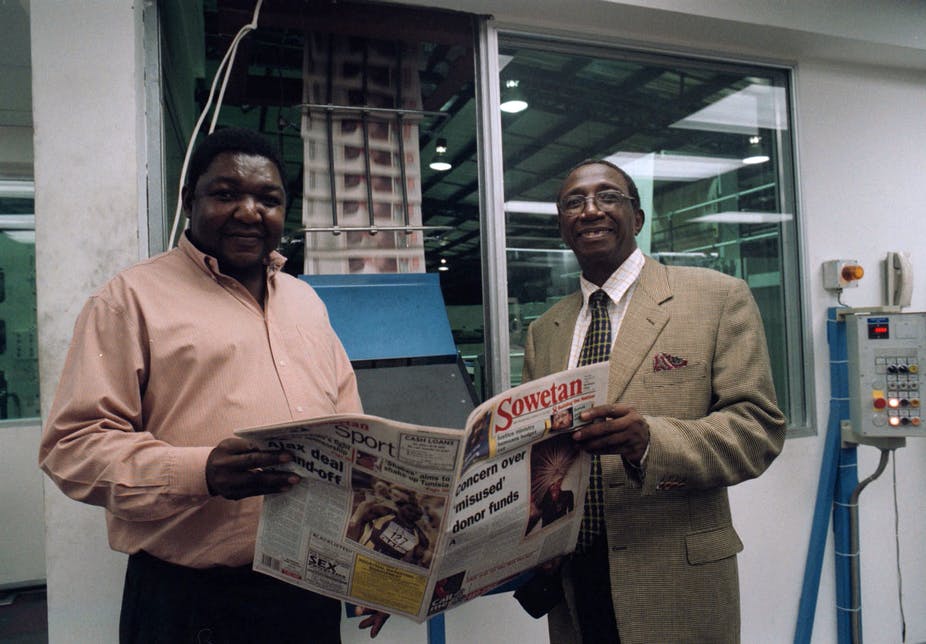 In 1988, Aggrey Klaaste became the editor of Sowetan and launched a project to intervene in the fraught political situation in South Africa. The Sowetan was the foremost daily newspaper for black South Africans, a successor to the Post and The World, both banned by the apartheid state.

It was a tumultuous time in South Africa, with state persecution and efforts to quell protest and opposition reaching their zenith. Amid ongoing protest against the apartheid state, the government had declared two states of emergency. In addition, political groups within the country were at war with one another.

Klaaste was distressed by what he saw happening in black communities, where residents faced state terror and political violence. As a result, he sought to rebuild local community organisations and to restore values such as good citizenship, self-help and neighbourly conduct. On taking up the editor’s mantle, he began outlining his “big idea” – nation-building. Its central idea was to unite black South Africans behind community improvement and engagement. He intended the newspaper to be a key driver of the project.

What Klaaste was doing was providing a forum for citizenship at a time when black South Africans were marginalised.

Klaaste immediately ran into strong headwinds – inside the newsroom and outside it.

Most of the journalists who worked for him supported the Black Consciousness Movement. The movement brought together the country’s oppressed people to collectively fight against racial oppression. They strenuously opposed nation-building, as they saw it as collaborating with the apartheid system.

One of the arguments encountered was that it wasn’t the time to talk about nation-building. Apartheid needed to be torn down first. A former Sowetan journalist remembers:

We actually confronted and fought Klaaste … saying, you know, ‘liberation now’ and good stuff later. But he said, ‘No, no, no – it’s got to go in parallel.’

Outside the newsroom, the union coalitions and mass anti-apartheid movements were advocating civil disobedience to bring the country to its knees, a far cry from Klaaste’s nation-building.

Klaaste persisted. He began to explore nation-building in his weekly column, “On the Line”. But the concept of nation-building presented a challenge. It was a vague ideal that needed to be fleshed out. So, at first, he floated the concept without too many details.

I am preparing the ground, laying the bed so to speak for the seed of an idea I hope to be planting in the not too long future. Frankly, the idea excites and exhilarates me as it appears to have breath-taking possibilities.

The birth of an idea

Klaaste suggested that black South Africans were in a weak position, despite being in the majority, and that the weakness stemmed from a lack of unity, the lack of a “central idea” to motivate all the various movements.

Nation-building could be that idea.

His column inaugurated a conversation with his readers about nation-building. He also circulated them before publication to Sowetan journalists for critique. The idea began to evolve through these processes. His column became the philosophical heart of the nation-building campaign that Sowetan was establishing, the space where the idea was debated and developed.

At first, Klaaste maintained an uncertain and questioning position, reporting on reactions to the idea. He shared the positive responses and the negative. He tended to answer criticism by stressing the need to rebuild community, to work for a future.

However, soon he and his colleague Sam Mabe began engaging vigorously with opposing views. Klaaste was always respectful and constructive in his engagements. He felt strongly that people with differing political positions should talk to each other. He demonstrated such bridge-building through his writing.

One column explicitly modelled the “for and against” of his idea. In early 1989, he put his nation-building approach side by side with its main opposition, the “liberation first” position, writing the column as a discussion between two friends. His interlocutor is unnamed, but could have been any one of a number of Sowetan senior colleagues or anti-apartheid activists. He is described by Klaaste as “a dear friend of mine”, “who has in various courageous, responsible ways, showed me what it means to be committed to the struggle”.

Klaaste “hears” the friend’s argument in the column, honouring both the speaker and his position:

He has convinced me in his quite persuasive way that if the decision for the total revolution is taken in his unselfish totally responsible way, you must be a fool not to agree with him … He has taught me that perhaps we are almost fated to pay the heaviest of prices for our mistakes…

In response, Klaaste convinces his friend to let him give nation-building a shot.

The column described not so much an argument, but an ongoing process of dialogue, in which everyone’s point of view was heard.

Klaaste and Mabe also began fleshing out nation-building in relation to other philosophies. Early on, ubuntu (humanness) is introduced as a foundational concept. The southern African word is often used to encapsulate sub-Saharan moral ideals, expressed in the maxim

a person is a person through other people.

Klaaste argued that nation-building was black South Africans taking moral leadership in creating a future for the entire country, based on the practice of ubuntu, which he connected to a range of black political leaders. Among them were Robert Sobukwe, founder of the Pan Africanist Congress, and Nelson Mandela.

Klaaste didn’t nail nation-building to any political flag, but as “the nation’s forum to sort out divisiveness”. He used the example of a family, in which each member has different political affiliations:

I belong to an extended family … we have leanings towards a whole range of diverse and ideological planks. We never fight over this … Nation Building is about the formation of such filial links.

Nation-building thus provided a broad church for the variety of politics in black communities. The campaign also explicitly drew on one aspect of Black Consciousness, active self-reliance, to argue that black communities must take charge of their own empowerment.

By 1989, a year into nation-building, the campaign was firmly established at the newspaper. In 1989, too, the apartheid government began talks with the ANC. These were to culminate in a democratic dispensation for South Africa.

This made nation-building highly relevant to the new era of creating inclusive citizenship.

This article is an edited extract from a chapter in the book Public Intellectuals in South Africa: Critical Voices from the Past, edited by Chris Broodryk and published by Wits University Press

Lesley Cowling is Associate Professor in the Department of Journalism at the University of the Witwatersrand. This article is republished from The Conversation under a Creative Commons license. Read the original article here.