How can civic tech and media innovators fund their ideas or platforms? 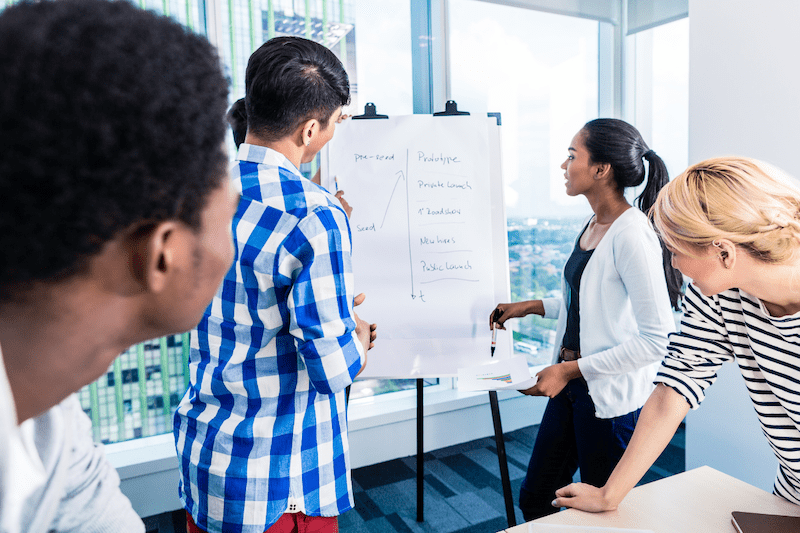 “As entrepreneurs we always have these big visions of how to make a dent in the universe,” said  Roland Perold, co-founder and COO at Volume, a podcast production company. However “one of the most important lessons that I’ve learned over the last couple of years is the value of starting small and starting with an uncomplicated product focusing on a smaller market and building a small sustainable business,” he added. That was the sobering advice Perold gave to founders of start-ups on how to fund and sustain their ideas and platforms.

He along with panellists spoke at a virtual discussion hosted by Jamlab in collaboration with the Civic Tech Innovation Network. The discussion focused on ways in which start-ups can finance and monetise their new ventures.  The panellists included Perold, Paul Mashegoane, Founder at Seasoned Capital, a private equity firm that consists of seasoned business leaders in the country. Iyanu Fatoba, Communications Associate at BudgIT Foundation, a Nigerian civic technology organisation that simplifies government data particularly public finance which allows citizens to openly engage with the government. Deepa Iyer, Impact Investor at Luminate, a global philanthropic organisation that invests globally in several different markets. The sentiments shared by Perold were echoed by the other panellists, who all agreed that it was important for founders to focus on a core idea and who their stakeholders are.

How innovators can fund their ideas?

“I think the most innovative ideas that I’ve seen are ones that find a vision and stick to it early,” said Iyer. She explained that, “there are a lot of funders in different ecosystems that have different strategic agendas and so often start-ups are thinking about that funding ecosystem, instead of thinking about who their stakeholders are, what their product market fit is, and really reiterating on that early on”. Iyer noted that it is important for start-ups to not get distracted by different opportunities and funders, but to remain focused.

Perold from Volume echoed Iyer’s sentiments that, “focusing on your early users or clients is where you’ll find the answers”. They both noted that it is important to focus on an idea that fits in the market.

“As a podcast production company our clients are our core stakeholder and focusing on that, getting that first client really figuring out what is the value that we can create that they are willing to pay for,” he said.

Unique ways of raising funds when traditional avenues have failed

Mashegoane said when it comes to raising funds, innovators should start with the three F’s: friends, family and fools, – it is those people who are willing to bet on you. Mashegoane encouraged start-ups to take the road less travelled and find untraditional ways of funding such as partnering with an established company. He explained that funders can be reluctant to fund start-ups due to a lack of credibility and doubting that the start-up is able to return their investment or funding. Healso advised innovators to get a mentor, who can invest or fund a start-up. He said that the best way to get a mentor is when you show interest in the mentor’s projects or companies, “people respond when you are singing their praises”.  However Mashegoane warned innovators when approaching mentors, not to start by asking for favours as it repels them [funders].

Thirdly Mashegoane said that innovators should look into the enterprise development departments within banks. The fourth piece of advice he shared was that start-up’s should group themselves with other peers within the industry, “as companies tend to listen to a collective rather than individuals”.

Iyer said that it is important for innovators to do their research in advance and understand who the funders are and who have these funders funded in the past.  She advised that some of the best people to connect with are people who have been funded by the funders, to “get an understanding of whether the funder is someone who you want to work with in the first place”.

What are funders looking for in applications for funding?

Mashegoane said that in South Africa, funders are more concerned about return on investment, whereas in developed economies, funders invest in companies that are not profitable in the beginning. He said that funders also look at whether there is a need for what the innovators are offering and then look at the numbers. “If the numbers make sense, it justifies why they should invest in your business plan in its entirety,” he said. The Seasoned Capital founder said that it is important for start-ups to test their ideas, “you might have a great idea that makes sense to you, but the market might not respond as you think”. Mashegoane said it is important for innovators to test their ideas with actual market feedback.

Fatoba from BudgIT in Nigeria, said that it is important for founders “to shoot their shot the right way, but you have to prepare that shot before you shoot it when it comes to funders”. She stressed the importance of researching funders and what their interests are and innovators need to find a way to bring in their interests to align with the funders. The Communication’s associate said that “numbers don’t lie,” meaning that founders need numbers to show their impact in order to get funding. She explained that founders need to prepare a report that shows a success story, “try to visualise your impact story”.

Perold said that, “I think the pandemic brought the future 10 years closer and the rate of innovation in both media and civic technology is going to be incredible to see, it is going to be all around us”.