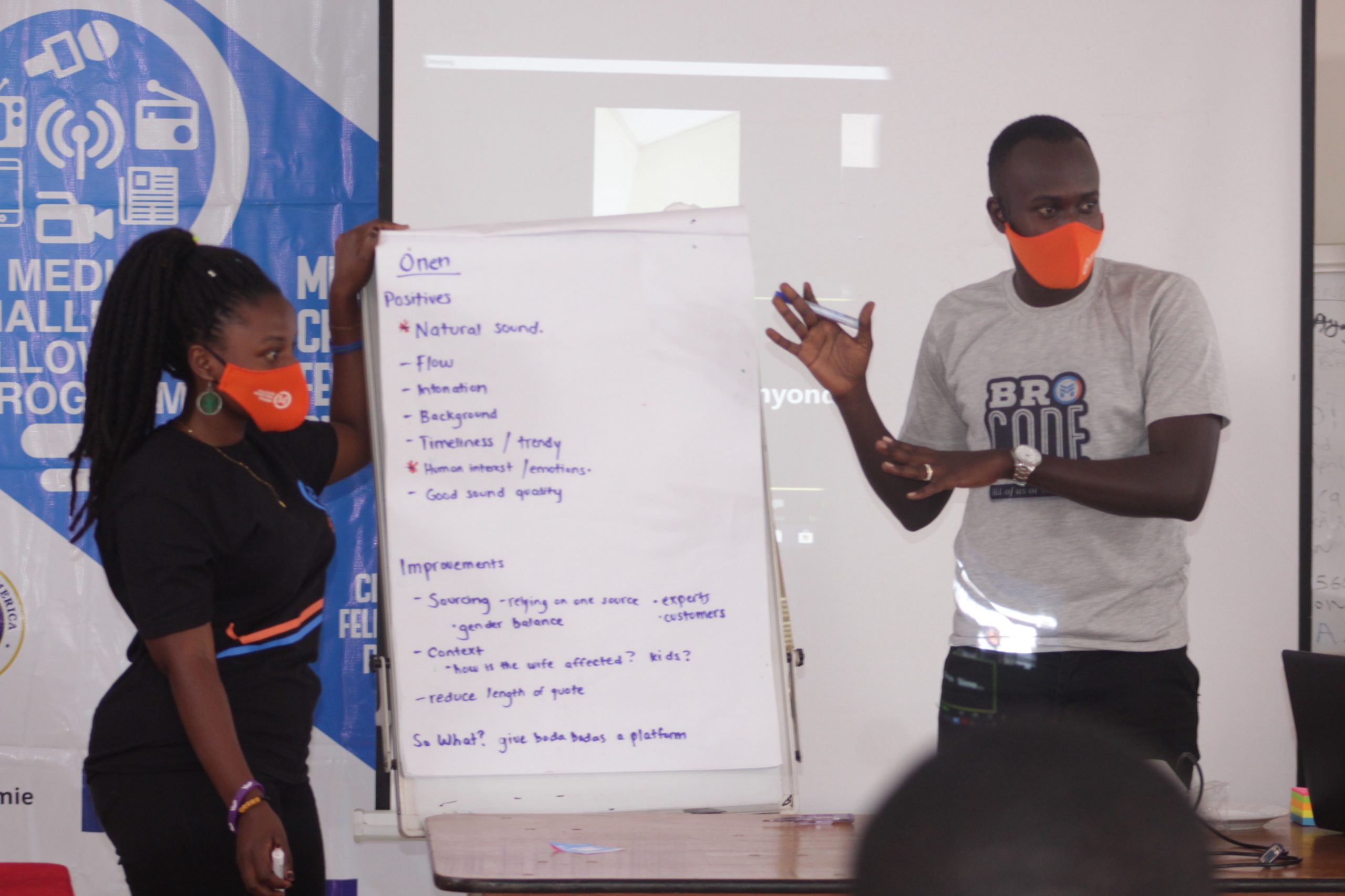 The July 17, 2018 speech by former U.S. President Barrack Obama, delivered at a lecture to commemorate the 100th anniversary of the birth of Nelson Mandela, resonated with many people for different reasons. But for Ugandan journalist Abbas Mpindi, it was a speech that brought the attention of the world to the effort that a team with whom he set up a media social enterprise whose impact before its 10 birthday has been ground-breaking.

That social enterprise, named the Media Challenge Initiative (MCI), was started in 2012 and formally registered in 2016 by four Ugandan journalists. They are 34-year-old Mpindi, Simon Peter Kakooza Senyondo (28), Antonio Kisembo (35), and Ivan Kimuli Kigozi (32). The quartet has built an organisation that employs at least a dozen people full-time and has trained more than 100 budding journalists to prepare them for the workplace.

As Obama spoke about the legacy that Mandela left behind, and the challenge it posed on each generation “to help our youth succeed”, he described the role his own Foundation was playing at the time to offer a hand up to a group of upcoming social entrepreneurs working to support a new generation of young African leaders in different fields.

“My Foundation is convening over the last few days, two hundred young people from across this continent who are doing the hard work of making change in their communities; who reflect Madiba’s values, who are poised to lead the way,” he said, adding: “People like Abbas Mpindi, a journalist from Uganda, who founded the Media Challenge Initiative, to help other young people get the training they need to tell the stories that the world needs to know.”

Some two years and a month to the day that President Obama recognised Mpindi and the MCI, the team behind the media social enterprise is as hard at work as ever in the Ugandan capital, Kampala. It’s a sunny day at a hotel in a Kampala suburb near Makerere University and, although the government is yet to fully lift the lockdown measures it imposed in March 2020, MCI has found a way around the health ministry’s social distancing guidelines to train a group of 26 fellows who form this year’s cohort.

To conform to the health ministry’s guidelines, MCI has split its 2020 cohort into two groups that train concurrently in separate rooms, with another five other fellows attending the fellowship virtually via Zoom. Each day, the fellows learn from senior Ugandan journalists who specialise in different newsroom beats — from investigative, financial, agriculture, education, entertainment to environmental reporting.

The goal, as Mpindi and his team keep reminding the fellows, is to turn each fellow into a “one-person journalism army.” They hope to develop a journalist who is as comfortable before (or behind) a television screen and/or a radio microphone as they are about doing investigations and research, writing long-form pieces, taking pictures, navigating past a website, creating graphics and promoting content on social media.

“We try to have [training] sessions that work on all those themes and then we have the practical sessions where the fellows go out and get stories as they learn the basics of camera work, photography and radio and all that,” explains Annika McGinnis, 26, the programme manager at MCI.

The Initiative, whose flagship idea is the “NextGen” journalism project, offers several opportunities throughout the year for budding journalists have to learn and participate as they compete for the opportunity to enrol in the six-month fellowship.

McGinnis explains that the project starts with a Media Challenge Expo, which involves organising media activities spanning three days at each of the different universities in Uganda, train students and then avail them platforms to showcase their talents.

“The Expo is a three-day media festival,” she says. “The first day we do mobile journalism training; how to use a smartphone to tell a video story. We then have a conference. Then the Universities present their top 20 students to form a news team. We assign them stories in their communities to do. Finally, we have a journalism contest that we judge.”

The winners of the contest receive recognition during a colourful media challenge award night, which is held as a separate event. “The awards night is a black-tie affair where we recognise the best [performing] students,” explains McGinnis.

For the journalism students, the accolade night is not the end of the MCI experience. Instead, it is a stepping stone to the fellowship opportunity, which paves the way for them to be paired with an experienced journalism mentor for a year, to receive hands-on training for six months and undertake at least one field reporting assignments in the Ugandan countryside.