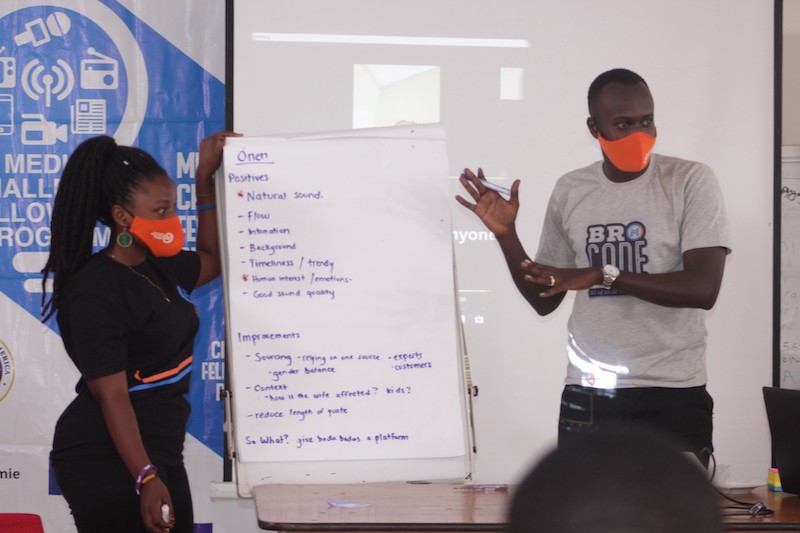 The July 17, 2018 speech by former U.S. President Barrack Obama, delivered at a lecture to commemorate the 100th anniversary of the birth of Nelson Mandela, resonated with many people for different reasons. But for Ugandan journalist Abbas Mpindi, it was a speech that brought the attention of the world to the effort that a team with whom he set up a media social enterprise whose impact before its 10 birthday has been ground-breaking.

That social enterprise, named the Media Challenge Initiative (MCI), was started in 2012 and formally registered in 2016 by four Ugandan journalists. They are 34-year-old Mpindi, Simon Peter Kakooza Senyondo (28), Antonio Kisembo (35), and Ivan Kimuli Kigozi (32). The quartet has built an organisation that employs at least a dozen people full-time and has trained more than 100 budding journalists to prepare them for the workplace.

As Obama spoke about the legacy that Mandela left behind, and the challenge it posed on each generation “to help our youth succeed”, he described the role his own Foundation was playing at the time to offer a hand up to a group of upcoming social entrepreneurs working to support a new generation of young African leaders in different fields.

“My Foundation is convening over the last few days, two hundred young people from across this continent who are doing the hard work of making change in their communities; who reflect Madiba’s values, who are poised to lead the way,” he said, adding: “People like Abbas Mpindi, a journalist from Uganda, who founded the Media Challenge Initiative, to help other young people get the training they need to tell the stories that the world needs to know.”

Some two years and a month to the day that President Obama recognised Mpindi and the MCI, the team behind the media social enterprise is as hard at work as ever in the Ugandan capital, Kampala. It’s a sunny day at a hotel in a Kampala suburb near Makerere University and, although the government is yet to fully lift the lockdown measures it imposed in March 2020, MCI has found a way around the health ministry’s social distancing guidelines to train a group of 26 fellows who form this year’s cohort.

To conform to the health ministry’s guidelines, MCI has split its 2020 cohort into two groups that train concurrently in separate rooms, with another five other fellows attending the fellowship virtually via Zoom. Each day, the fellows learn from senior Ugandan journalists who specialise in different newsroom beats — from investigative, financial, agriculture, education, entertainment to environmental reporting.

The goal, as Mpindi and his team keep reminding the fellows, is to turn each fellow into a “one-person journalism army.” They hope to develop a journalist who is as comfortable before (or behind) a television screen and/or a radio microphone as they are about doing investigations and research, writing long-form pieces, taking pictures, navigating past a website, creating graphics and promoting content on social media.

“We try to have [training] sessions that work on all those themes and then we have the practical sessions where the fellows go out and get stories as they learn the basics of camera work, photography and radio and all that,” explains Annika McGinnis, 26, the programme manager at MCI.

The Initiative, whose flagship idea is the “NextGen” journalism project, offers several opportunities throughout the year for budding journalists have to learn and participate as they compete for the opportunity to enrol in the six-month fellowship.

McGinnis explains that the project starts with a Media Challenge Expo, which involves organising media activities spanning three days at each of the different universities in Uganda, train students and then avail them platforms to showcase their talents.

“The Expo is a three-day media festival,” she says. “The first day we do mobile journalism training; how to use a smartphone to tell a video story. We then have a conference. Then the Universities present their top 20 students to form a news team. We assign them stories in their communities to do. Finally, we have a journalism contest that we judge.”

The winners of the contest receive recognition during a colourful media challenge award night, which is held as a separate event. “The awards night is a black-tie affair where we recognise the best [performing] students,” explains McGinnis.

For the journalism students, the accolade night is not the end of the MCI experience. Instead, it is a stepping stone to the fellowship opportunity, which paves the way for them to be paired with an experienced journalism mentor for a year, to receive hands-on training for six months and undertake at least one field reporting assignments in the Ugandan countryside.

Mpindi says the informal linkage between newsroom leaders and experienced reporters with rookies from their academy has helped to open doors to the kind of opportunities they would otherwise not have been able to secure on their own. 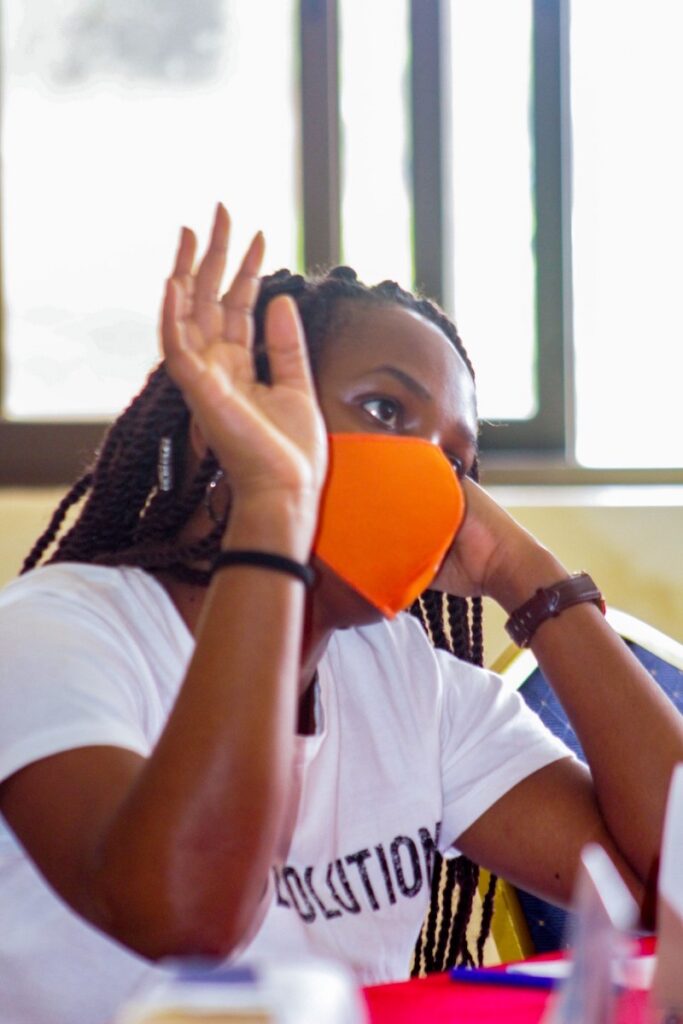 Rukia Nabbanja, a 2020 Media Challenge Initiative fellow, participating in a health reporting beat session facilitated by Walter Mwesigye, a health reporter and news anchor with NTV Uganda. This was during the MCI fellowship training programme in August in Kampala. Image: Supplied

“A lot of people come to us informally and ask us to recommend fellows for different opportunities,” says Mpindi. “Some of our fellows have started their own publications.”

There are no readily available independent statistics on the absorption rate of MCI fellows into media organisations. However, according to Mpindi, more than 60% of the fellows are snapped up by media houses almost as soon as they graduate.

Among the shining lights of MCI is Nigerian journalist Caleb Okereke, who was pursuing a bachelors’ degree in journalism at Cavendish University in Uganda when he secured the MCI fellowship. Okereke has since set up Minority Africa, a digital publication that he now runs as managing editor.

The other is Noah Omuya, who set up Aica Communications, a multi-media organisation based in the eastern region of Uganda, some 320 kilometres from the capital Kampala.

In an interview with Jamlab Africa, Omuya said he registered his company shortly after the MCI fellowship that ended in July 2019. Omuya explained that some of his mentors encouraged him to use the skills he’d picked up to “create his own playing ground” rather than go to hone his craft at existing media houses that were unlikely to give him a chance to experiment as much as he wanted to.

“During the fellowship, we learnt a lot of things and what caught my attention was multi-media journalism. By the time we were done with the multi-media journalism training, I felt sufficiently equipped to be able to fit in any newsroom. However, during my engagement with my mentors, I decided to open my own space because the newsroom would not offer me the opportunity to do the stories I wanted to do how I wanted to do them,” he said.

The 24-year-old Omuya says his media organization has six part-time employees, although he hopes to take them on a full-time basis in the not-so-distant future. For now, he says, he’s identifying and training other young journalists while spotting those he thinks can enable him to achieve his organization’s long-term goals.

Besides the fellowship programme, MCI runs a media academy that is open to anybody interested in learning practical journalism skills. Within the academy, they run an online radio for practical skilling of fellows and other trainees.

Kisembo, a founder member and the head of training at MCI, says the Academy offers two-month-long courses to students who sign up with their organisation. He said that because of the capacity they have built over the years, they continued to operate normally during the coronavirus-imposed lockdown.

“What we did was to host a lot of online training programmes that were dedicated to academy students, fellows and alumni,” he said. “We encouraged the students to participate in our online programmes and produce content from their communities which they shared with us and we would air them on MCI radio.”

According to Kisembo, the online programmes enabled the students to learn how to turn theory into practice on their own.

From its modest beginnings, MCI has grown its profile to a level where they are the go-to organization for media training and mentorship programmes in Uganda. In the recent past, they have partnered with Africa Check in South Africa and UNESCO to offer fact-checking training, collaborated with DW Akademie in Germany to train young people on how to tell radio stories, and have been co-opted into a media viability programme run by the Aga Khan University and DW Akademie within the East African region.

Mpindi looks back to their humble beginnings when they could raise only $81 of the $26,500 they needed to launch their first project, and says he’s proud that MCI surpassed its initial target of merely creating a platform to smoothen a young journalist’s path to the newsroom. But he says the team is not sitting on its laurels. Instead, they are aiming big.

“We have achieved that initial vision of skilling them, building their confidence and ensuring that they have the latest skills to do their job,” he said. “We are humbled that we have created a space where media organisations come to look for talent. We have proved that concept works. We are now at a stage where we are building platforms to sustain this vision of building the next generation of journalists and to scale it across Africa.”