How a political satire puppet show unsettled the Kenyan elite

The XYZ Show pushes the satirical envelope without offending those in power, but at the same time, telling the full story 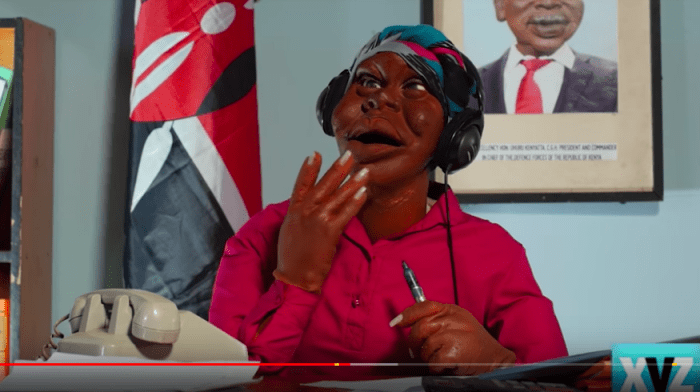 This article was written by Loi Awat and King Muriuki for Nieman Lab. The text that follows is in Awat and Muriuki’s own words.

The pair produce the The XYZ Show, a satirical show in Kenya. Muriuki and Awat talk about the work they do and how they’re trying to develop new audiences and how they work journalistically, in many ways achieving the types of impact often associated with journalism.

KING MURIUKI: As you can see, we’re clearly over the top. The environment in which we work is very conservative. But satire is an important and often untouchable tool, where conversations that are deemed too sensitive or controversial should happen.

Our main avenue for broadcast is television, but we get too much government interference. As many of you might know, the Kenyan government doesn’t have a good track record of freedom of its press. There was a media blackout earlier this year. We do also have problems of self-censorship from broadcasters, who find our content too touchy for many of their audience.

But if we do not offend most of the time, we assume we are not effective when it comes to our satire. That’s kind of our motto.

We have found online distribution to be a very important avenue to reach our audiences. Most of the times when we can’t get to our million-plus viewership via TV, we turn to YouTube, Facebook, and Twitter to get to our very loyal audiences. We’re reaching 500,000-plus on Facebook, 100,000-plus on Twitter, and now have seen up to a total of more than 10 million views on YouTube. We’re also on Showmax.

Our full time team is around 10, but when we’re in production numbers can go up to 60. We are a not-for-profit show that’s mostly funded by donors such as The Open Society, the Hivos Foundation, and the Lambent Foundation. We get some money from the broadcaster that goes straight back into production costs.

The work we do is very well accepted by the public, and it trickles down to the kids, so a lot of times the politicians would be very scared of what we mentioned, how we highlighted them, because their families and their children ask them questions. A lot of times politicians come to us and ask, please avoid talking about us for the sake of our reputations. But you’re in public office. We can’t avoid that.

LOI AWAT: My official title is head writer. At The XYZ Show, in addition to writing content for the show, I manage a team of about five writers, organizing meetings and other activities like workshops and team building, setting deadlines and following up, and representing the writers in larger production crew meetings. I also finalize the script each week by editing the content written by other writers, and curating content for each episode.

The idea behind doing this as a puppetry show — rather than using real people — is that it allows us to address serious issues in a comical way. Puppets are not real people; they’re caricatures, and it would seem trivial to get angry or riled up about a caricature — the real people behind the puppets are somewhat shielded because they’re not what people see. At the same time, puppets are close enough to real people so that it’s clear that our content is about issues in the real world, and people in the real world. Puppets are also funny and interesting to look at, and most of our cast is based on real characters; this is an added layer of humor to the satire.

Using puppets is definitely more demanding than using body actors on screen, but the ability of puppetry to create a world that is not the real world, but lives right next door to it, is a great tool for the nature of our content. We try to keep skits under two minutes long, and this is for both the TV audience and the online audience. For the writing team, the process isn’t influenced by what could happen at the distribution stage. This consideration is more likely taken at the editing stage.

At the start, we understand the intention of the show, and that’s to promote good governance and social justice in Kenya. So before each season begins, we have a list of issues that we feel are major things that we should address or highlight, with regard to this intention: for example, healthcare, education, corruption, tribalism, unfair business, misuse of political power, impunity, and so on.

We conduct workshops around these issues, inviting experts in these fields to speak to us and share information that we wouldn’t be able to get through basic research; for instance, the chair of the Kenya Medical Association during the 100-day doctors’ strike in 2017.

We’re currently off-season, so the writing team is not active at the moment. Once the season begins, as we’re writing each episode, these issues form the basis for a lot of our content, and of course new issues will always arise as we go along.

Current affairs are the lens through which we address these issues, and we typically go by events rather than by specific people. A few characters appear in every episode (e.g., the president), but that’s because there’s always something the president is doing that relates to the issues, or there’s a role that he should play to address the issue. For example, we would interview the head of the Teachers’ Union because one of the issues we identified early on is education, and this is not inspired by any specific current event. We would do a skit on land owners versus indigenous populations, because the news of violent attacks on ranchers in Laikipia raised the issue of historical land injustices, which we feel is important in the scope of things.

We’ve heard from people that we’ve satirized. Some reach out through social media and engage with us and other views — e.g. Nairobi’s Governor Sonko; TV personality Jeff Koinange on whom our show host, Keff Joinange, is based. Some use their staff — or henchmen — to submit complaints or try to intimidate, usually by calling the broadcaster or even our funding partners. Some — Martha Karua, Jeff Koinange, have actually visited the show.

We’ve also heard from viewers who are upset, and this is mainly on social media. We’re accustomed to all manner of insults on social media! Some people have the decency to write us a private message where they articulate their opinions on our show or give us advice on how to be better. The one I remember was someone who felt that it’s not right to make fun of our “elders,” the politicians, because in the African context, the elders are highly respected. Making a puppet of an elder is insolent. We appreciate feedback.

This article was first published on NiemanLab.