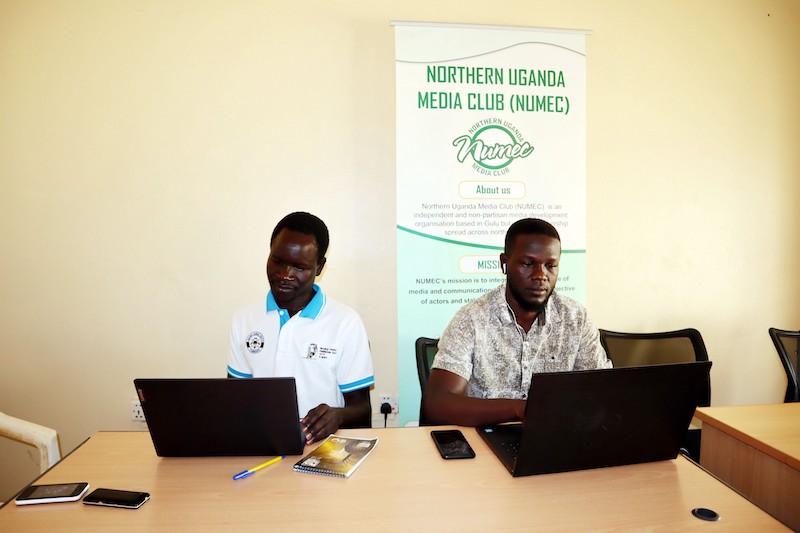 For nearly two decades, a war between the Ugandan government forces and a rebel group led by Joseph Kony, an internationally known warlord, wreaked havoc in the northern region of East Africa’s third-largest economy.

By the time the guns went silent in 2006, the cost of the war stood as follows: at least 100,000 Ugandans had lost their lives; another 100,000 children were abducted by the Lord’s Resistance Army (LRA) rebel outfit and either conscripted into fighting or turned into sex slaves; plus a further 2.5 million people displaced from their homes and herded into humanitarian camps.

Amidst the wanton destruction of life and property, and at a time when much of the northern region was cut off from the rest of Uganda, a group of local journalists braved it all to tell the world the story of a conflict that one top UN official once described as the world’s “biggest, forgotten, neglected humanitarian emergency.”

John Muto-Ono p’Lajur, now aged 68, was one of those journalists. Having received an appointment on February 8, 1993, as a correspondent for The Monitor newspaper (later renamed Daily Monitor), Muto had nowhere to sit and do his work.

At around the same time, Pelegrine Otonga, 60, had just found a job with a local language newspaper, Rupiny (a now-defunct Vision Group publication), reporting on the war.

Neither newspaper had an office in Gulu town, the epicentre of the vicious war, so the two reporters decided to hire a small room where they would sit. They were later joined by other correspondents such as Gloria Laker Aciro, Richard Balmoi, and James Oketch Bitek, all of whom would go on to enjoy stellar careers as journalists.

“Between me and Otonga, we started Gulu Press Club in 1993,” Muto said in an interview. “We thought of making it formal but we had no money to register.”

Otonga added that once the numbers grew, they renamed it into the Northern Uganda Media Club (NUMEC), a name that would be more inclusive for all the print, radio and television journalists in northern Uganda.

In the early 2000s, a young generation of University-trained journalists emerged to cover the vicious war, including Moses Odokonyero, who completed his undergraduate studies at Makerere University in 2004. It did not take long for Odokonyero to notice a trend that disturbed him and other frontline journalists covering the protracted conflict.

“When there was an active conflict in the north, of course, there were reporters there covering the story and filing stories. But whenever something significant happened, like the president visiting the north or maybe something perceived to have a national element, the story would then be covered by a reporter from [the capital] Kampala,” Odokonyero recalled.

Consequently, when the war ended 14 years ago, Odokonyero and colleagues opted to take advantage of the newly attained peace to “reverse the thinking about this [skills] gap.” They decided they would set up a local media organisation through which they would develop the capacity of journalists in the region to a level where they would be a match for the best around the world.

Odokonyero’s intervention resulted in the formal registration of the Northern Uganda Media Club (NUMEC) as a non-profit media development organisation in 2009. He became the media non-profit’s founding chairman.

“The journalists who were working at the time, of course, were working under very difficult circumstances yet they were actually disseminating very critical information that the public needed to know. They were covering war; they were themselves exposed to the effects of war, so the need for them to work together to protect themselves but also defend the environment in which they were operating at the time is one of the reasons why they thought about forming a press club where they would come and sit and chat and share story ideas, share experiences, that kind of thing. So, the organisation they had in mind was both a social and professional club,” he explained.

In its infancy, NUMEC received support from both local and international organisations to get it on its feet. The Gulu District Local Government offered them a run-down building which they renovated with the help of USAID.

By the time renovations on the building were complete, it had a newsroom (with workstations and computers) to accommodate at least a dozen journalists, reliable wireless internet access, a production studio for audio and video content, and a generator to provide thermal power whenever load-shedding limited access to grid electricity.

With that foundation, NUMEC was able to partner with the Institute for War and Peace Reporting (IWPR) to implement a three-year post-conflict journalism initiative named the Facing Justice Programme.

The 25-minute radio programme episodes, which were syndicated to various stations across the conflict-affected region, received a warm reception and were seen as bridging an information gap that existed for people trying to rebuild their lives after two decades of instability.

Over the years, NUMEC has provided a home to many budding journalists through its newsroom and production studio, offered training opportunities on peace journalism, use of information technology in conflict-sensitive reporting and other issues, as well as mentorship programmes on life skills such as developing a savings culture. They have also developed a number of journalism guides, including a media toolkit for reporting on peace and reconciliation.

From their efforts over the last 10 years, according to Charles Akena, the NUMEC Programmes Coordinator, their biggest contribution to journalism is to develop the skills of their more than 100 members and elevate a considerable number of them into doing journalism on the national stage and beyond.

“We have empowered journalists to report on peace and justice, climate change, natural resources, land rights and other issues,” he said. “More journalists are now able to produce in-depth content that is more informative to the public. We have journalists who are producing very good content.”

These journalists include John Ken Okot, a current NUMEC programme assistant, who is a regular contributor to the Thomson Reuters Foundation, Christian Science Monitor and African Arguments among others; Irene Abalo Otto who is a multimedia reporter with the Nation Media Group (NMG)’s Uganda titles; Alex Otto of Uganda Radio Network, and Benson Ongom, now the Gulu Bureau Chief for NBS Television.

Abalo, 32, a member of NUMEC since 2013, had not started her undergraduate studies by the time she joined the organisation. She says NUMEC gave her a platform where she could network, interact with, and learn from, more established colleagues.

“By 2015, through NUMEC, I was able to participate in a USAID project called “Voices for Peace,” where I produced feature stories on development issues and challenges in a post-conflict northern Uganda. I got the exposure to apply my skills beyond NUMEC. It gave me the confidence to try for other opportunities,” she said.

By the time the project ended in 2017, she was writing for The Observer newspaper, was selected for an International Women Media Foundation fellowship (2018), and was admitted into the NMG media lab for a five-month hands-on multimedia training stint in Nairobi, Kenya.

When she graduated from the NMG lab, there was a full-time staff job waiting for her at the NMG outlets back in Uganda. Today, Abalo reports for both the Daily Monitor newspaper and NTV Uganda in Kampala.

“NUMEC gives you a chance to explore opportunities beyond your comfort zone because you have the facilities, especially the internet, and editors like Moses Odokonyero and Emmanuel Okanokodi that help you to improve your skills,” she said.

To non-members, and the public generally, NUMEC provides several services for a fee. They include press conference facilities, content production, and a venue for community dialogues as well as advocacy and promotion activities.

“More than 90% of the press conferences in Gulu take place in NUMEC,” says Odokonyero. “In the last election (2016), most of the presidential candidates, except a few like President [Yoweri] Museveni and [former Prime Minister Amama] Mbabazi, had their press conferences at NUMEC.”

More recently, NUMEC has ventured into new turf, using its latest grant funding from UNESCO to start the training of journalists in the region on new media tools and convergence and collaborative journalism.

The programme kicked off on November 5 in the northern Ugandan city of Lira, where 15 journalists received training and then developed story pitches during a three-day workshop. The next training is in Gulu in mid-December, while others will take place in other parts of the region in early 2021.

Akena says NUMEC will eventually make a call for story reporting grant applications at the end of the training, which the training beneficiaries and other interested journalists in the region will be eligible to compete for.

One of the trainees, Immaculate Amony, who is the Lango bureau chief for Uganda Radio Network, said the workshop enhanced her understanding of story pitching and collaborative reporting, especially while doing investigations.

“From the training, I learnt that you can involve other people and that will help bring a broader picture of the story, and it will help to keep you safe,” said the 27-year-old journalist. “I also got to know that there are lots of organisations out there that are willing to support journalists and that we can use those opportunities to get resources to do stories and serve the communities to be better informed.”

Both Odokonyero and Akena mentioned that they recognise the media landscape — and the general needs of the area where they are based — have changed since NUMEC was formed. As such, they are working to re-shape the organisation.

Akena says they have already bought land next to Gulu University, where they hope to build a permanent home for NUMEC in the not-so-distant future. He is also working to widen the reach of the organisation in terms of the programmes it offers and its physical presence in the region.

Odokonyero, on the other hand, is looking at the more technical aspects of their operations to improve its sustainability; developing a strategic plan, improving the administrative structure to have a robust board of directors, improving accountability mechanisms, improving the organisation’s project planning, implementation and documentation, as well as donor relations, and growing its social media footprint.

“NUMEC needs more skilled people within those areas to be able to move forward,” he says.

What the organisation’s current managers do not doubt is the fact that NUMEC has a role to play in media capacity development in northern Uganda. In fact, according to Odokonyero, NUMEC has even set the template for how to develop the skills of journalists from less privileged backgrounds anywhere in Africa.

“Media organisations like NUMEC are part of the future,” he asserts. “If you look at the concentration of most media developmental organisations, [it is in the capitals]. These are the ones that are doing much of the training upcountry. That means if the regional media organisations are strengthened to have the capacity to plug certain gaps that are specific to their regional context, these organisations can then build strategic alliances with those that are based at the centre and in future they can even do collaborative work.”