Fighting for media credibility is crucial in pressured newsrooms 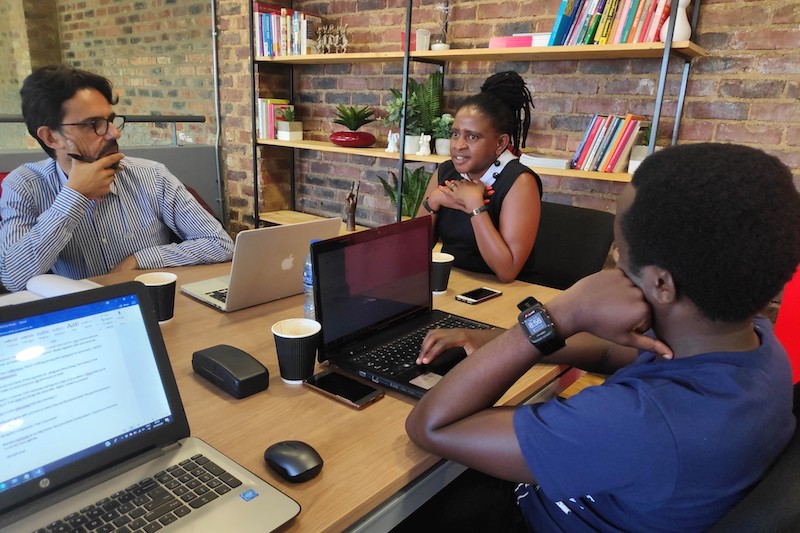 To fight back against various challenges and threats, newsrooms must distinguish themselves over social media noise, uphold standards of verification, and become smart about financial pressures.

As editor-in-chief of Eyewitness News in Johannesburg and chairperson of the South African National Editors Forum (SANEF), Mahlatse Mahlase is active in promoting media reliability both on an institutional and industry level. She laid out some challenges and strategies in a recent session with jamlab Accelerator teams.

Mahlase notes with concern a trend of media outlets reporting on or amplifying information on social media platforms such as Twitter, which can undermine their trustworthiness if not done responsibly. While Mahlase recognises the power of online communities to draw attention to important issues, such as in the murder and domestic abuse of South African woman Karabo Mokoena, she urges newsrooms to use it wisely. Mahlase says, “I am very clear in the newsroom. Social media is a tip-off. You still have to do the journalism.”

This is especially true because of the increased amount of opinions and information for audiences online. “People are overwhelmed,” she says, “they’re at a point where they don’t even know why they should care because it is emotionally exhausting to invest in the news cycle.” In the age of seemingly endless information and online commentators with strong followings, reporters must do better to verify posts and bring in context beyond the 140 characters.

Getting the facts right remains crucial to media credibility, even in a pressured news and digital environment where journalists may not be the first ones to break a story. Mahlase explains that her newsroom runs with a story when they have two or, when necessary, three sources. “We have hardly ever gone with one source unless the source is actually the person involved in the story,” she says, explaining that she is reluctant to do this because it can be too risky without getting the other side of the story.

The other principal factor in ensuring trustworthiness is having robust internal checks and balances that ensure reporters aren’t working in isolated ways and that diverse opinions are represented when considering stories. For instance, Mahlase says that “no story should not be on the table” and that at least four people should be giving input unless it is an incredibly sensitive case. She notes that in strained newsrooms there is a worrying temptation to give investigations to a select group of people that inadvertently start working in a bubble that makes their content more vulnerable to being biased or unverified.

These threats to trustworthiness are increased by strained resources that directly affect the quality and credibility of news coverage. “There isn’t a newsroom that isn’t under pressure,” and most are straining to break even, she says. This means that editors will often have to make difficult decisions in prioritising content and cut corners. For instance, one may report based on a TV live stream of a press conference instead of sending a journalist, which increases the possibility that parts of the story may be misrepresented or missed.

Financial pressure can also threaten an outlet’s trustworthiness when the need for advertising revenue must be balanced with upholding editorial independence. Mahlase explains that since the separation between editorial and sales divisions in newsrooms is now less distinct, news editors are faced with difficult decisions, such as whether and how to allow political parties to advertise on online news articles.

Her strategies for creating a balance between revenue and audience trust center on disclosure. For instance, “there’s nothing wrong with saying ‘the news is brought to you by so and so’ as long as they do not have influence into your content.”

The fight to maintain and reclaim media trustworthiness involves newsrooms distinguishing themselves as important voices with solid verification and smart financial strategies. “The media has played a critical role to change the trajectory of this country,” Mahlase says of South Africa. “Yes, there are things that we could change internally, but there’s also much more good that we’ve actually done for this country.”