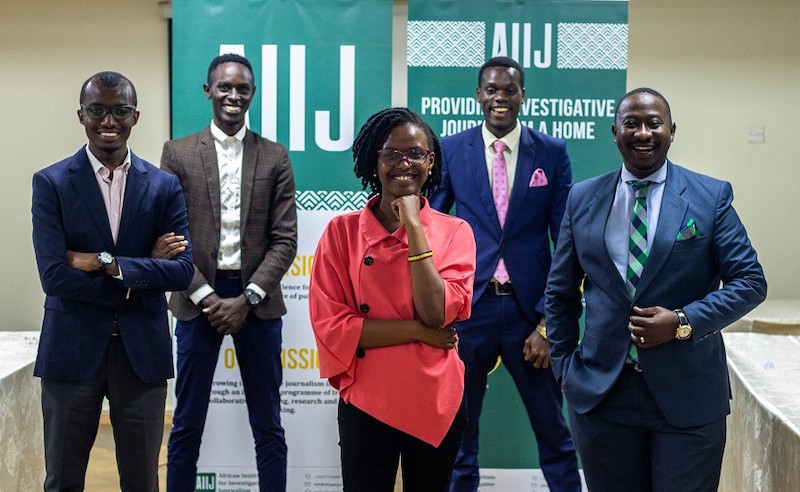 In a career spanning 12 years, Ugandan broadcast journalist Solomon Serwanjja has had an impactful role as an investigative reporter. This is exemplified by the fact that his work has earned him at least 26 awards, including the prestigious 2019 BBC Komla Dumor award.

During that time, the 34-year-old broadcaster has also endured several tribulations brought on him by his passion for exposing the wrongs in Ugandan society through journalism. Occupational hazards have included a police raid on his home and arrest of his wife, a man-hunt by security agencies, and legal and court battles with those he’s sought to expose.

It is said that for most people, life’s most transformative moments do not often come in times of triumph. Instead, they show up during periods of adversity. Serwanjja, whose moment of reckoning came when Ugandan authorities hounded him and a group of BBC Africa Eye investigative journalists with whom he was collaborating with for the “Stealing From the Sick” documentary, believes it was then that he experienced a light-bulb moment.

According to Serwanjja, as the joint BBC-NBS TV investigative team battled to overcome accusations by Ugandan authorities that he and his wife stole restricted medicines, he received tremendous support from the British broadcaster. This not only helped them to successfully fight off the charges, but it also enabled the team to complete their investigation.

“For me, that experience showed the power of collaboration because the BBC really put its mighty weight behind that project,” said the NBS TV news anchor and reporter. “The BBC came on board with the resources, we came on board with the support system, and, together, we went out there and did some good journalism.”

Before the collaboration with the BBC, Serwanjja says he had tried to similarly work jointly with colleagues from other local media houses on stories he felt needed more input than his own team at NBS TV could offer. However, it often did not amount to much.

“Often, they would say, ‘no, we cannot do that, we can’t do this.’ But I felt that this was not good because sometimes the projects would be so heavy that the only way to do them well would be through a collaborative effort,” he said.

After Serwanjja’s collaborative documentary with the BBC team came out, it won the Association of International Broadcasters award (investigative category) for 2019 and has garnered him acclaim in several quarters for exposing some of the corruption in Uganda’s health sector. It also played a key role in earning Serwanjja the BBC Komla Dumor gong — and the exposure that came with the accolade, including a three-month training stint at the BBC headquarters in London.

However, for Serwanjja, the partnership with the BBC also served as an eye-opener. He says, “After this [collaboration with the BBC], I was like, ‘Wow! This is huge. But how can we be able to do the same locally? What happens if BBC Africa Eye closes? Al Jazeera had Africa Investigates but it was shut down. So, what will happen to investigative journalism on the continent if all the big boys leave?’”

Serwanjja brainstormed over such questions with Raymond Mujuni, an investigative journalist and editor with NTV Uganda, who bought into the idea of establishing a “neutral ground” for journalists from various media houses to do — or learn about how to do — collaborative investigations, among other things. The duo later brought on board other partners, with whom they were able to set up the African Institute for Investigative Journalism (AIIJ) as a non-profit media organisation.

Today, Serwanjja is the executive director of AIIJ while Mujuni serves as his deputy. Although the two investigative journalists still work for their media houses, who compete for the attention of the same audience demographic across Uganda, they now jointly lead an entity whose work benefits not just their two rival TV networks, but other media houses in Uganda and beyond that seek to improve their investigative journalism.

AIIJ was formally registered on January 17, 2020, and its team hit the ground running when they set up a website, social media platforms and, more crucially, embarked on providing the services to journalists that they had envisioned in their initial plan.

With a few months of operations under its belt, AIIJ applied for — and received — a grant from the Open Society Initiative for Eastern Africa (OSIEA), which enabled them to rent part of a third-floor suite in Bulindo, a suburb on the outskirts of Uganda’s capital Kampala. Their office has a training room, an editing area and a meeting room, among others.

The nascent institute is currently working with five fellows who not only help with the day-to-day running of its five programme areas but are also improving their own investigative journalism skills. “We had an initial fellowship call from which we selected the first five fellows, each of whom came with a story idea that they eventually executed. Once we completed that initial fellowship, we chose to retain them,” explained Mujuni.

One of the fellows, Hakim Wampamba, 24, says that during the seven months that he has spent at AIIJ, he was worked on two yet-to-be-published investigative projects, written two op-eds on the AIIJ website, received practical television production and broadcast skills, and participated in four training sessions and two AIIJ webinars.

The head of the training and capacity building at the institute, Eve Masawi, says the institute has so far received considerable support from reputable local and international organisations in Uganda. “Although AIIJ is still a baby in the industry, the number of organisations that have come up to support us show the immense interest in the idea that we are building at AIIJ,” she said.

Masawi, however, echoes the voices of the organisation’s founders when she says that for them to live up to the dream of growing an institute that serves the entire continent, they will need even more support to build the existing programmes and develop initiatives to sustain the institute.

For starters, Mujuni explains, AIIJ needs to develop the capacity to beef up its team with another five members in order to enhance the work the current team is doing in order to achieve its short-term and medium-term targets.

“We are currently looking for funding to improve our human resource capacity,” he said. “Unlike other non-profits, we don’t yet have the core funding we need to take care of our administrative costs. We are still depending on our savings to manage our day-to-day expenses.”

According to Mujuni, their operational model is currently project focused, meaning that they develop specific projects within each of their programmes and then go out to potential funders to seek out the financial support they need to execute them. Once a funder accepts to finance a particular project and releases money, they implement it.

Using the project-centric model, AIIJ has been able to punch above its weight. To date, they have implemented a fellowship project, hosted two regional webinars, conducted six training projects for investigative reporters, and are currently working on a collaborative investigative project titled, Profiting from the Pandemic.

“We have held trainings on investigating public debt, reproductive health issues and elections,” said Serwanjja. “We are now doing research on how the media is covering elections, looking particularly at the digital side of things.”

Among the successful projects that Serwanjja is particularly proud of is that AIIJ brought together a group of like-minded partners to participate in what he describes as Uganda’s first-ever investigative journalism conference. He now expects the half-day event, which was broadcast live on NBS TV, to turn into an annual event to appraise the state of investigative journalism in Uganda.

“Every year we’ll be hosting the Uganda investigative journalism conference to discuss investigative reporting in Uganda. So, it is now an annual calendar event and this year we plan to hold it in August. It will be a two-day conference. We are super excited about it, we are already working on it with our partners,” he reveals.

Yet all the achievements that AIIJ registered in its first 14 months of operations could have failed to come through due to the outbreak of the Covid-19 pandemic. Mujuni says the coronavirus, which resulted in a lockdown and — thereafter — stringent social distancing measures, forced the institute to shelve its initial plans and change tact.

“The pandemic forced us to abandon our initial strategy and, even after lockdown, we could not reach all the reporters we planned to with our training projects because we had to abide by the SOPs (standard operating procedures put in place by the government for meetings in a bid to stem the spread of the virus),” he said.

Nonetheless, the fact that AIIJ was able to achieve as much as it has despite the challenges that it faced in its first full year of operation, is a testament to the drive, tenacity and adaptability of the team behind the institute. Serwanjja says the possibilities are immense and he is “super excited” about what they plan to do going forward.

“The future is bright,” Serwanjja enthuses. “We want to create a home for investigative reporting not only here in Uganda but in East Africa and in Africa as a whole. I am super excited about the future and what we will be able to do together as a community of investigative reporters through AIIJ.”

Buoyed by the success that they were able to achieve in the first year, the AIIJ team is dreaming even bigger for their second year. Besides expanding their Uganda Investigative Journalism Conference from a half-day to a two-day event in year two, they are also planning to host the first ever East African Investigative Journalism Summit in the Tanzanian city of Arusha.

In the long term, Serwanjja says their plan is to develop AIIJ into a centre of excellence for investigative journalism not just in name and the services it offers, but also in terms of the physical infrastructure that houses the institute.

“We have a five-year plan where we want to buy about 10 acres of land and set up the institute, a big building which has conference rooms, office spaces, a cafeteria, a studio, a library and an accommodation area,” he said. “We want to be able to host the African Investigative journalism Conference in Uganda, at the institute one day, just like Wits University does. We want to create a home for investigative reporting not only for Uganda or East Africa but for Africa as a whole.”