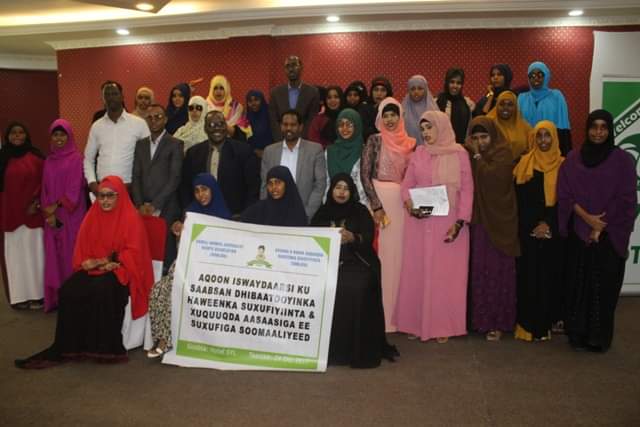 The Somali Women Journalist’s Rights Association (SOWJRA) is an organisation focusing on women journalists’ rights and empowerment through education and development activities. The main aim of founding the organisation is that the members contribute their knowledge coupled with the efforts of the international community in promoting the skills and the participation of the Somali Women Media and TV in the development of the local media. Its purpose also includes rights and association policies that address the barriers in the mass media and pays particular attention to ameliorating the awareness and training on job-related violations as well as forums on gender balance in the workplace.

SOWJRA runs several programmes that empower women journalists. These programmes are education: educating newswomen on other methods of mass media to express themselves and their messages despite the prevailing political and financial obstacles throughout the entire country. Documentation: the organisation documents all types of violations against not only women journalists but other vulnerable women, girls, and children in the community in Somalia. Advocacy and lobbying: the rights of Somali women journalists and other vulnerable and at-risk women, girls, and children in the community to better live in dignity and freedom in their country. Peacebuilding: Somalia has been in civil war for almost a decade. There is still instability in most parts of the country, particularly in the southern regions. Capacity building: SOWJRA extends capacity building programmes to different sectors including young women journalists who are willing to build up their careers. Community development: SOWJRA helps the community to identify and realise their full potential and collaborate with the local community to create networks and links for development.

Can you tell us about your organisation and the work that you do?

Our organisation is called Somali Women Journalist’s Rights Association (SOWJRA), and as it can be seen from its name, we advocate, train, empower, and support women journalists.

What are the experiences of women journalists in Somalia?

What are the working conditions for women journalists in Somalia?

The working conditions of Somali women journalists are really hard and hazardous, as they are violated in every corner of their work.

How does your organisation help empower and protect women’s rights?

What are some of the challenges that you have faced as an organsation?

We are always met with challenges, but, the greatest challenges are traditional religious values, and also the lack of application to the laws of human rights in our country.

Somalia is one of the most dangerous places for reporters, how does your organisation mitigate or address this?

We address this issue by training the female reporters to avoid reporting issues that may be a threat to their personal security. And we also give training about the safety of female journalists in risky areas. On the other hand, we advocate for illegally detained women or their rights being violated.

What are the practical skills or tips that your organisation can provide to women journalists to ensure their safety?

Practical skills we provide women journalists to ensure their safety include; safety training and training to avoid reporting non-accurate reports that can be a threat to their lives.

What have been the highlights/achievements of your organisation thus far?

Change was made among the perception of female journalists, about their job. And that males are not dominant.  We can also highlight that we grew confident enough to advocate beyond women journalists. Through media, we tried and succeeded at our three-year project of anti-child and early marriage. We also trained female journalists for democracy and political participation.

What plans does the organisation have going forward?

Our future plan is to reach all women instead of women journalists. Because we have seen women with microphones can change a lot.

What do you hope to see in the Somalian media landscape in the coming years?

We hope to see Somalia’s media become like the media of developed countries. Media where female educated journalists are equal with male journalists, in terms of equal employment opportunity, equal salary with similar tasks. And see media where women are visible in news stories.